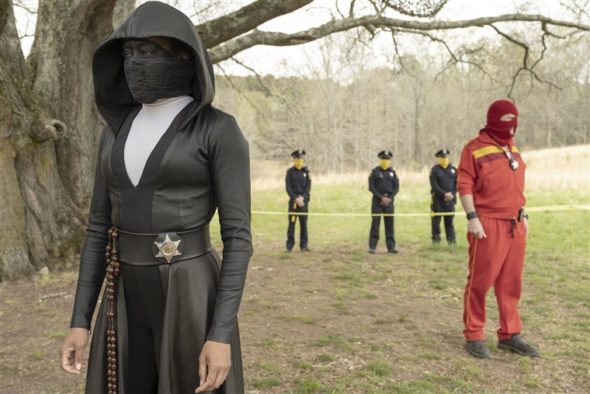 Can this show live up to the original graphic novel series?  Has the Watchmen TV show been cancelled or renewed for a second season on HBO? The television vulture is watching all the latest cancellation and renewal news, so this page is the place to track the status of Watchmen, season two. Bookmark it, or subscribe for the latest updates. Remember, the television vulture is watching your shows. Are you?

Airing on the HBO television network, Watchmen is loosely based on the 1980s graphic novel series of the same name by Alan Moore and Dave Gibbons. Created and developed by Damon Lindelof, the TV series is set in a world where the original story took place and begins in 2019, 34 years after the comic’s story ended. The show stars Regina King, Don Johnson, Tim Blake Nelson, Louis Gossett Jr., Jessica Camacho, Andrew Howard, Jeremy Irons, Jean Smart, Yahya Abdul-Mateen II, Jacob Ming-Trent, Adelaide Clemens, Frances Fisher, Tom Mison, Sara Vickers, Hong Chau, and James Wolk, with guest Robert Redford. In an alternate version of America, where superheroes are treated like outlaws, President Robert Redford (Redford) has been in office since being elected in 1992. A white supremacy group of Rorschach (an anti-hero from the original story) followers, aka “The Seventh Cavalry,” has committed simultaneous attacks on the houses of police members. As a result, the police conceal their identities behind masks.

The first season of Watchmen averaged a 0.24 rating in the 18-49 demographic and 759,000 viewers. Find out how Watchmen stacks up against other HBO TV shows.

Will HBO cancel or renew Watchmen for season two? This is a high-profile project so I’m feeling confident that it will be renewed as long as the creators want to do it. I’ll update this page with breaking developments. Subscribe for free alerts on Watchmen cancellation or renewal news.

1/17/20 update: Executive producer Damon Lindelof isn’t interested in making a second season of Watchmen and HBO doesn’t want to make one without him.

What do you think? Were you hoping that the Watchmen TV show would be renewed for a second season?

This is the worst race baiting POS show I’ve ever seen. I hope this garbage gets canned.

Yes, creator Damon Lindelof has also said the same thing.
He said if enough fans show an interest, he’ll do another season, but I kind of doubt it will happen