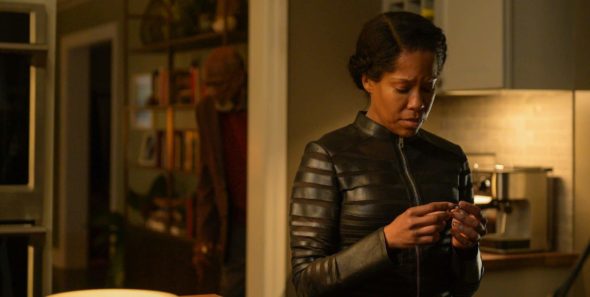 Watchmen fans have some bad news coming their way. It doesn’t look like the series will return for a second season. Damon Lindelof is not interested in pursuing it. This comes via USA Today, and it is a change of tune from what the man said last month following the wrap of the series.

At that time, he said he just needed the right idea to come to him. A month later, he is saying that he doesn’t want to do another season. He did give HBO his blessing to continue the series without him, but that won’t happen either.

Casey Bloys, HBO programming chief, said the following about continuing the series without its creator:

“It would be hard to imagine doing it without Damon involved in some way.”

Watchmen ended on a cliffhanger featuring a big change to Regina King’s characters. With this news, fans will be left to wonder what would have happened to her character next.

What do you think? Did you want more of Watchmen on HBO? Are you sad Damon Lindelof will not come back for season two?

This should have been the best series of the decade. Instead it ****** up the canon of one of the best stories of all time. Ok, we start with racism rearing it’s ugly head. Fine. We tie this back to the original masked crusader. Fine. But then EIGHT EPISODES IN, we randomly drop in Dr. Manhatten, and randomly make him black. WTF, definately not fine. Now this story is in the future (compared to the movie), so it would have been a good story to think average humans wanted to steal Dr. Manhatten’s powers. But these two concepts were tragically… Read more »

The TV show was good, but it takes liberties and changes some things from the movie and comics, which is illegitimate considering that it’s made by someone else. I’d much rather they had created a new story with a new name and new characters. Riffing off of someone else’s work and changing facts to suit your own story is not cool.

If the movie and comics didn’t exist or if this show hadn’t used their name and characters, this would have been a very good show that I’d be sorry to see end. But because of these issues, I’m conflicted.

HBO – please understand that there is no shame in returning to the previous business model that spit out well-developed, WELL-PLANNED series that earned you the reputation you are quickly destroying. If you insist on using Lindelof again, please PLEASE put a warning at the beginning of each episode so we can be adequately prepared and temper our expectations. It wasn’t until the third episode that I learned of Lindelof’s participation in this series, and against better judgment, I gave him a third chance to actually PUT THOUGHT into, oh I don’t know, CAN I ACTUALLY WRAP UP THESE LOOSE… Read more »

Have we all developed amnesia and somehow forgotten what this man did to The Leftovers or Lost?? Don’t look a gift horse in the mouth – at least Lindelof isn’t waiting until the last season to completely screw the fans over.

PLEASE HBO – go back to the previous business model which resulted in quality storylines. Hell, at this point, just find a young producer who doesn’t list Lindelof as a role model.

You’re on the verge of losing the well-established reputation you built up with your previous series – Netflix and Amazon are learning quick.

As a fan of Regina King and Don Johnson, I wanted to support the show but it just made no sense to me especially with the Jeremy Irons role. Also, I found it too troubling to watch. Instead of fun or interesting.

I’m pretty sure this show was a troll and when it fizzles it will be because nobody cared.

I’m in the middle of Season one I just found out That it won’t be renewed for season 2. I’m a little upset about that I thought it was a pretty Dang good show I mean I read all the watchmen comic books love the movie this is different Because it takes place in a different time and I thought it was pretty good.

It was a horrible show, and not really related to the original Watchmen storyline at all. Don Johnson, as usual, was good. But the rest was over acted and over dramatized. Ugh…good riddance.

not a surprise at all, this is NOT the watchmen, went off on a totally ridiculous tangent,HAPPY there wont be a season 2,….maybe let the creator have the rights back,and then in a few years do it right.

Jeff
Reply to  saw it coming

Look at the 8 thumbs downs you got. Have these people even seen the movie or read the comics? The Alan Moore story was much deeper, delving into issues like, what is life. This story is about social issues, which are important, but not as important as metaphysical issues about life itself. Totally different levels of stories. On the other hand, this would have been a good show if it had its own name and its own characters. It’s great that they exposed that disgusting massacre in Oklahoma to the general public, it was a dark secret that America had… Read more »

Seriously! I did not even consider if there would not be a Season 2!So disappointed! but keep renewing crap and animated non English crap! So pissed! Loved this show.

You don’t have to **** on anime to make your point. I’m also pissed at this, but I love anime in addition to great live action. Anime isn’t to blame here, and there is a ton of anime that rivals great live action tv. So, please, educate yourself on a genre before shitting all over it.

I thought this was a very bold series and I would have liked to see what happened next. I am disappointed that there will not be a second season.

shame and a curse be upon lindelof, zack Snyder, and all those who have used and will use the great work of alan moore without his consent. boo dc. boo time warner. boo any one who likes or supports their thievery and crappy “adaptations, prequels, or sequels.”

If only it WAS Moore’s to give or deny consent. He knew DC owned the rights when Moore cashed those big DC cheques.

Thank god this trash was cancelled. Return the rights to Alan Moore as should have been the case long ago.

Pretty sure Moore got paid for writing Watchmen. If they cheated him, and there is no contract signed by Moore, then he should sue DC. It’s like saying George Lucas should take Star Wars back cuz u hated the last movie, ignoring $$$ and legal contracts. If Moore was drugged by DC when he signed over Watchmen, then he needs to tell police and sue.

If you read into the story about it, Moore was tricked with the wording of the contract by DC about the rights returning to him compared to all the previous works that were done. Because of the whole underhandedness of the situation he hasn’t had anything to do with DC since and he is a very stubborn man.