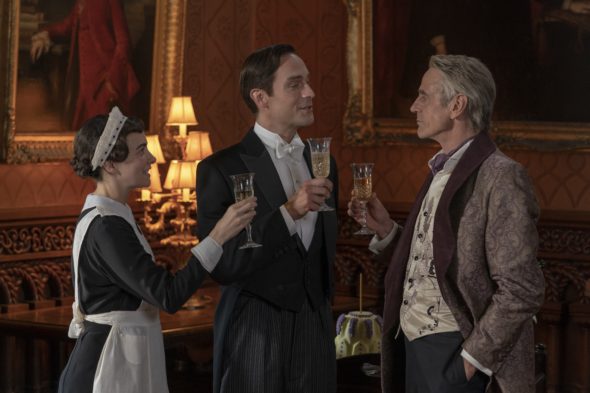 Who is watching the first season of the Watchmen TV show on HBO? As we all know, the Nielsen ratings typically play a big role in determining whether a TV show like Watchmen is cancelled or renewed for season two. Unfortunately, most of us do not live in Nielsen households. Because many viewers feel frustration when their viewing habits and opinions aren’t considered, we invite you to rate all of the first season episodes of Watchmen here. *Status update below.

An HBO superhero drama series, Watchmen is loosely based on the 1980s graphic novel series of the same name by Alan Moore and Dave Gibbons. Created and developed by Damon Lindelof, the TV series is set in a world where the original story took place and begins in 2019, 34 years after the comic’s story ended. The show stars Regina King, Don Johnson, Tim Blake Nelson, Louis Gossett Jr., Jessica Camacho, Andrew Howard, Jeremy Irons, Jean Smart, Yahya Abdul-Mateen II, Jacob Ming-Trent, Adelaide Clemens, Frances Fisher, Tom Mison, Sara Vickers, Hong Chau, and James Wolk, with guest Robert Redford. In an alternate version of America, where superheroes are treated like outlaws, President Robert Redford (Redford) has been in office since being elected in 1992. A white supremacy group of Rorschach (an anti-hero from the original story) followers, aka “The Seventh Cavalry,” has committed simultaneous attacks on the houses of police members. As a result, the police conceal their identities behind masks.

What do you think? Which season one episodes of the Watchmen TV series do you rate as wonderful, terrible, or somewhere between? Do you think that Watchmen on HBO should be cancelled or renewed for a second season? Don’t forget to vote, and share your thoughts, below.

*1/17/20 update: Executive producer Damon Lindelof isn’t interested in making a second season of Watchmen and HBO doesn’t want to make one without him.

Definitely needs and deserves a second season. Damon Lindelof did the Watchmen legend justice. Alan Moore was worried about absolutely nothing it seems. I honestly think that TV needs something from Lindelof at LEAST once a year. Watchmen season 1 gets a 10/10 from me