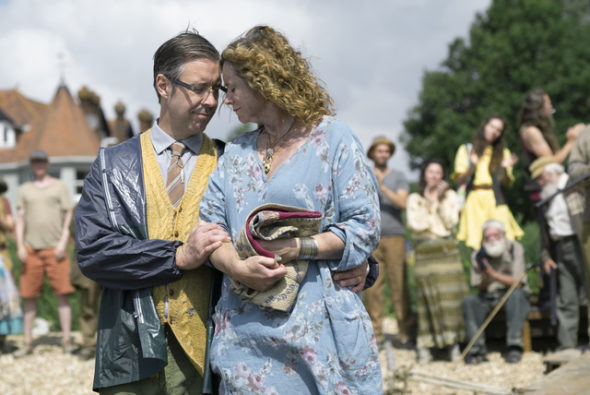 How will the stories connect in the first season of The Third Day TV show on HBO? As we all know, the Nielsen ratings typically play a big role in determining whether a TV show like The Third Day is cancelled or renewed for season two (in this case it seems to be a true mini-series). Unfortunately, most of us do not live in Nielsen households. Because many viewers feel frustration when their viewing habits and opinions aren’t considered, we invite you to rate all of the first season episodes of The Third Man here. *Status update below.

An HBO dramatic series created by Dennis Kelly and Felix Barrett, The Third Day stars Jude Law, Naomie Harris, Katherine Waterston, Emily Watson, and Paddy Considine. The story follows the individual journeys of a woman and a man who arrive on a mysterious island at different times. The six episodes are divided into two parts — Summer and Winter. The Summer trio of episodes focuses on Sam (Law), a man who is drawn to a mysterious island off the British coast where he encounters a group of islanders who are set on preserving their traditions at any cost. The Winter installments follow Helen (Harris), a strong-willed outsider who comes to the island seeking answers. Her arrival precipitates a fractious battle to decide the island’s fate.

What do you think? Which season one episodes of The Third Day TV series do you rate as wonderful, terrible, or somewhere between? Do you think that The Third Day should be renewed for a second season on HBO? Don’t forget to vote, and share your thoughts, below.

I like the story line and setting. I can relate to when high tide comes in and you can not get off the island. The writers are on mark … A quality story!