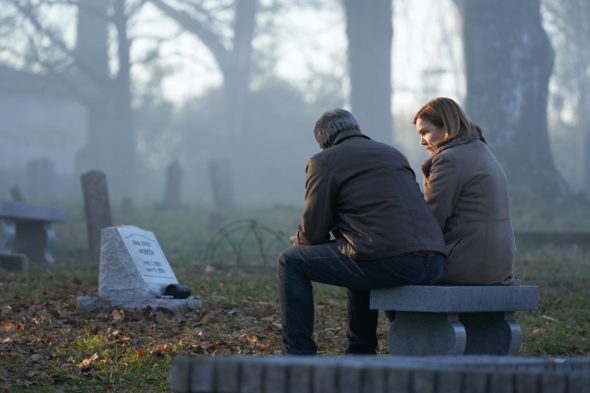 Will the killer be found in the first season of The Outsider TV show on HBO? As we all know, the Nielsen ratings typically play a big role in determining whether a TV show like The Outsider is cancelled or renewed for season two. Unfortunately, most of us do not live in Nielsen households. Because many viewers feel frustrated when their viewing habits and opinions aren’t considered, we invite you to rate all of the first season episodes of The Outsider here. *Status Update Below.

An HBO drama that’s based on the Stephen King novel of the same name, The Outsider TV series stars Ben Mendelsohn, Cynthia Erivo, Bill Camp, Mare Winningham, Paddy Considine, Julianne Nicholson, Yul Vázquez, Jeremy Bobb, Marc Menchaca, and Jason Bateman. While police detective Ralph Anderson (Mendelsohn) and his wife (Winningham) are still grieving the recent death of his son, he sets out to investigate the mutilated body of an 11-year-old named Frankie Peterson who’s been found murdered in the woods of Georgia. The mysterious circumstances surrounding this horrifying crime leads Ralph to bring in an unorthodox private investigator, Holly Gibney (Erivo). She has uncanny abilities that Ralph hopes will help explain the unexplainable.

What do you think? Which season one episodes of The Outsider TV series do you rate as wonderful, terrible, or somewhere between? Do you think that The Outsider should be cancelled or renewed for a second season on HBO, potentially with a new case? Don’t forget to vote, and share your thoughts, below.

Excellent show – left me hanging for another each week. Must have another season!

Have watch other Stephen King stuff before and The Outsider is up there with the best of them. I would definitely like to see a season 2 but it will only succeed with as many characters from Season 1 returning. I’ve recommended this show to all my friends and they like it too.

I HOPE there will be more great seasons of HBO’S THE OUTSIDER!!!!

Excellent story line. Would love to see characters in a new story. Kept me on the edge of my seat.

I LOVE this show!!! I So hope they have a 2nd season!
It’s one of the best shows I’ve seen in awhile!!

I love this show can’t wait for season 2

This is my first time watching a Stephen King movie. Very impressed. The intensity and creepiness of the mystery is very entertaining. Really kept me on the edge of my seat. I cannot wait for season two. All of the actors are wonderful. Hope to see them in the upcoming sequel.

I love this show, because it puts a different spin on reality as we know it. It also touches on a common occurance of dead happening in twos and threes sequences in families at one time. I can’t wait to see thenext episode. Holly realy steals the spotlight in the show. I hopethe show is renewed for a season 2.

If cancelling the season they should have at least one more episode to close the show. It’s not fair to just leave its fans hanging. Gives me cause not to watch HBO series if this is what they do to the people who subscribe and watch HBO.

I agree I was so looking forward to a second season. HBO has very little else that interests me.

Read the book and am hooked on the series. Anxiously awaiting season 2!

I love Stephen King. The series is wonderfully creepy. I can’t wait for season 2, and I don’t want season 1 to end. The actors are great. Please bring more series like this one.

Love this show. Hope there is a season 2

Great show. Great character’s, love it. Very different than other shows.
Hope it stays on for a while.