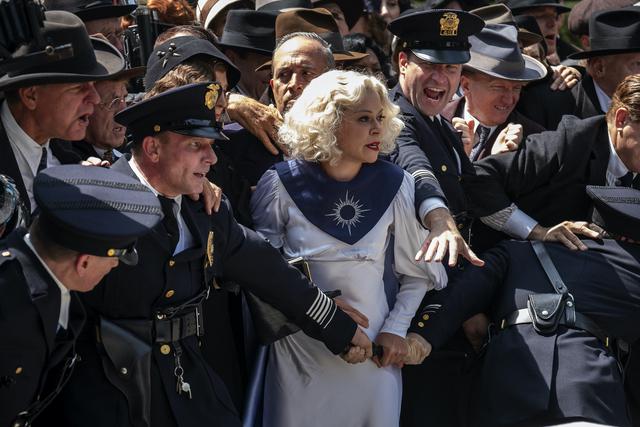 Is it “case closed” with the first season of the Perry Mason TV show on HBO? As we all know, the Nielsen ratings typically play a big role in determining whether a TV show like Perry Mason is cancelled or renewed for season two. Unfortunately, most of us do not live in Nielsen households. Because many viewers feel frustration when their viewing habits and opinions aren’t considered, we invite you to rate all of the first season episodes of Perry Mason here. Status update below.

An HBO detective drama, the Perry Mason TV show is a prequel that provides a reimagined origin story for the legendary criminal defense lawyer. The show stars Matthew Rhys, Tatiana Maslany, Chris Chalk, John Lithgow, Shea Whigham, Juliet Rylance, Stephen Root, Gayle Rankin, Nate Corddry, Veronica Falcón, Jefferson Mays, Lili Taylor, Andrew Howard, Eric Lange, and Robert Patrick. Before he became an attorney, Perry Mason (Rhys) was a low-rent private investigator who lived check-to-check in the 1930s. He’s haunted by his wartime experiences in France and suffers the after-effects of a broken marriage. Mason is often employed by a struggling attorney named Elias Birchard “E.B.” Jonathan (Lithgow) who serves as a mentor and father figure to Mason. Della Street (Rylance) is Jonathan’s secretary who’s both creative and driven legal. Paul Drake (Chalk) is a beat cop with a knack for detective work. Pete Strickland (Whigham) is hired by Mason as an extra set of eyes on his various investigations. Meanwhile, Sister Alice McKeegan (Maslany) is the leader of the Radiant Assembly of God and preaches to a hungry congregation and a radio audience across the country.

What do you think? Which season one episodes of the Perry Mason TV series do you rate as wonderful, terrible, or somewhere between? Do you think that Perry Mason should be cancelled or renewed for a second season on HBO? Don’t forget to vote, and share your thoughts, below.

7/23/20 update: Perry Mason has been renewed for a second season.

A little dark, but intriguing series, excellent acting and good story line so far. Impatiently waiting for the next episode, hope the end is as satisfying and hopefully the good guys win.

Perry Mason is great TV. It is like old school HBO has returned. Intelligent show. Intelligent viewers. Not everyone will get it. But those who do will remain loyal. Great Cast. Great story line. Matthew Rhys’ Perry Mason IS an amazing, complex character. If you want the cartoon version of Perry Mason watch Raymund Burr on MeTv. I’ve waited years for HBO to up its game and it finally has. I really hope Perry Mason is renewed for a 2nd season. It deserves a chance to grow. Creators need to ignore the competition from streaming services. Word will get around… Read more »

This show was depressing and Perry had no redeeming qualities. He didn’t even seem smart. I’ll stick with Bosch.

Am absolutely intrigued by this series. I’m definitely watching it week after week!
And, I hope the series doesn’t leave me hanging!
There better be a second season and more!
Great cast, wonderful story lines!
Keep the episodes coming. HBO!
Thank you

A little dark but enjoyable. Renew please to give it a chance.