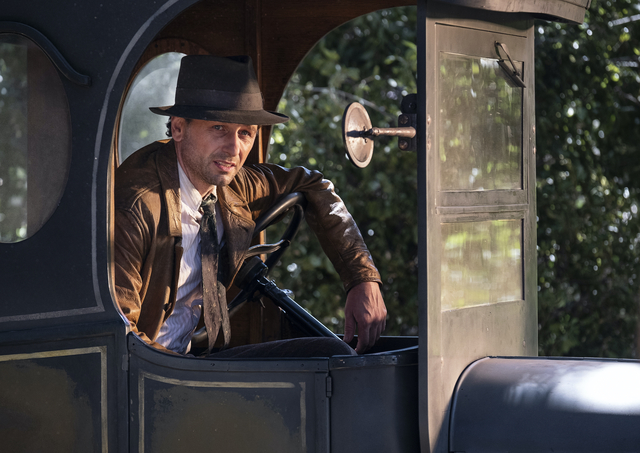 The original Perry Mason TV show ran for nine seasons (271 episodes) and 30 TV movies. It’s unclear if this newest Mason series on HBO will positively end after eight episodes or, if to could be renewed for a second season. Will the ratings be strong enough to persuade all involved to make additional episodes? Stay tuned. *Status update below.

A detective drama, the Perry Mason TV show is a prequel that provides a reimagined origin story for the legendary criminal defense lawyer. The show stars Matthew Rhys, Tatiana Maslany, Chris Chalk, John Lithgow, Shea Whigham, Juliet Rylance, Stephen Root, Gayle Rankin, Nate Corddry, Veronica Falcón, Jefferson Mays, Lili Taylor, Andrew Howard, Eric Lange, and Robert Patrick. Before he became an attorney, Perry Mason (Rhys) was a low-rent private investigator who lived check-to-check in the 1930s. He’s haunted by his wartime experiences in France and suffers the after-effects of a broken marriage. Mason is often employed by a struggling attorney named Elias Birchard “E.B.” Jonathan (Lithgow) who serves as a mentor and father figure to Mason. Della Street (Rylance) is Jonathan’s secretary who’s both creative and driven legal. Paul Drake (Chalk) is a beat cop with a knack for detective work. Pete Strickland (Whigham) is hired by Mason as an extra set of eyes on his various investigations. Meanwhile, Sister Alice McKeegan (Maslany) is the leader of the Radiant Assembly of God and preaches to a hungry congregation and a radio audience across the country.

What do you think? Do you like the Perry Mason TV series on HBO? Should it be renewed for a second season?

I absolutely love this show. And Rhys is the perfect pick to play Mason! I hope it is renewed.

The first time had access I binge watched the entire first season. I think it’s fantastic. Los Angeles film noir at its finest. Acting and a story worth following.

I love Parry Mason, we watch it every week

I found the show to waste the talent of the lead and to be for me beyond disgusting and dark and hopefully not reflect reality without a decent plot plus some guilt trip at me thrown in as if I discriminate which I do not .Gave up watching this downer

Absolutely hope its renewed! This show is fantastic. Terrific cast. Writing and a story line that’s off the beaten path. I think some people have difficulty with it because it begins so far afield from the old Perry Mason series, and they can’t understand why its even called ‘Perry Mason’. Stick with it though and the connection becomes clear. Matthew Rhys is consistently a gem.

Hope they renew. I love it

This big stinking pile is so bad, so incredibly bad it should.never have been made in the first place. It is a “period drama” with no clue about how do actially DO this type of program.

LOVED THIS SHOW. If you like noir, you will like this. Excellent everything–directing from Sopranos and Game of Thrones alum Tim Van Patten, superior writing and of course the wonderful Matthew Rhys. Catch up HBO show I have seen in a while.

I LOVED this noir origin story from director Tim Van Patten (Sopranos as well as some Game of Thrones episodes among other stellar series) and of course the excellent writers. Mathew Rhys is amazing. I was absolutely riveted. Please catch up before the next episode on Sunday. his deserves a long wrong. 10 stars!!

I believe that HBO got a real winner in the New Perry Mason series. I still hope that HBO will release the first season in DVD format.