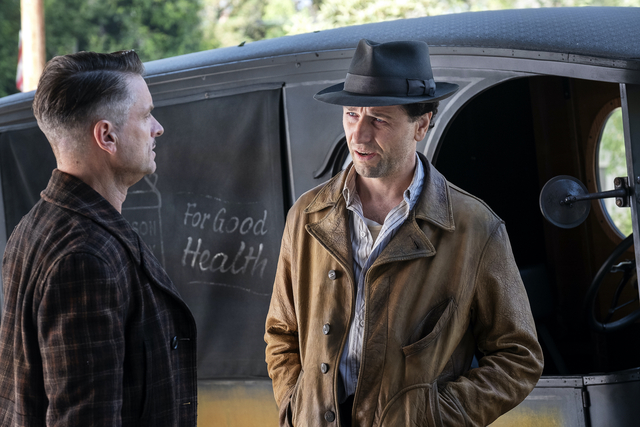 Can Mason solve this case? Has the Perry Mason TV show been cancelled or renewed for a second season on HBO? The television vulture is watching all the latest cancellation and renewal news, so this page is the place to track the status of Perry Mason, season two. Bookmark it, or subscribe for the latest updates. Remember, the television vulture is watching your shows. Are you?

Airing on the HBO cable channel, the Perry Mason TV show is a prequel that provides a reimagined origin story for the legendary criminal defense lawyer. The show stars Matthew Rhys, Tatiana Maslany, Chris Chalk, John Lithgow, Shea Whigham, Juliet Rylance, Stephen Root, Gayle Rankin, Nate Corddry, Veronica Falcón, Jefferson Mays, Lili Taylor, Andrew Howard, Eric Lange, and Robert Patrick. Before he became an attorney, Perry Mason (Rhys) was a low-rent private investigator who lived check-to-check in the 1930s. He’s haunted by his wartime experiences in France and suffers the after-effects of a broken marriage. Mason is often employed by a struggling attorney named Elias Birchard “E.B.” Jonathan (Lithgow) who serves as a mentor and father figure to Mason. Della Street (Rylance) is Jonathan’s secretary who’s both creative and driven legal. Paul Drake (Chalk) is a beat cop with a knack for detective work. Pete Strickland (Whigham) is hired by Mason as an extra set of eyes on his various investigations. Meanwhile, Sister Alice McKeegan (Maslany) is the leader of the Radiant Assembly of God and preaches to a hungry congregation and a radio audience across the country.

The first season of Perry Mason averaged a 0.10 rating in the 18-49 demographic and 937,000 viewers. Find out how Perry Mason stacks up against other HBO TV shows.

Will HBO cancel or renew Perry Mason for season two? My sense is that this may be intended as a mini-series with a true ending but, I wouldn’t be surprised if the cast and crew returned for a second season. I’ll update this page with breaking developments. Subscribe for free alerts on Perry Mason cancellation or renewal news.

7/23/20 update: Perry Mason has been renewed for a second season on HBO.

What do you think? Are you glad the Perry Mason TV show has been renewed for a second season on HBO?

Watched all 4 currently available episodes and am hooked. Hope there is a season 2. Very well done.

I was very intrigued with the first episode. I’m hooked. Veronica Falcon is one of my favorite actresses.

Why can’t writers come up with their own characters instead of reviving characters that have already been identified with an iconic Actor? Show some ingenuity.

This was SO GOOD. I hope more people will watch. It was absolutely riveting and if you like noir, this is the show for you. This is probably the best HBO show I have watched. (from the director of lots of Sopranos episodes as well as Game of Thrones and many more in between. Great work writers and director Tim Van Patten!