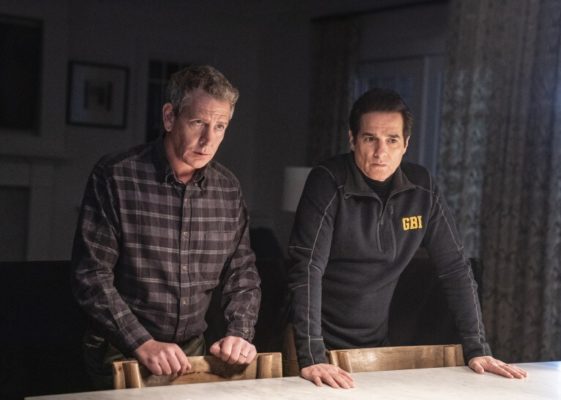 Can Ralph find the killer while overcoming his grief? Has the The Outsider TV show been cancelled? Renewed for a second season on HBO? The television vulture is watching all the latest cancellation and renewal news, so this page is the place to track the status of The Outsider, season two. Bookmark it, or subscribe for the latest updates. Remember, the television vulture is watching your shows. Are you?

The first season of The Outsider averaged a 0.25 rating in the 18-49 demographic and 914,000 viewers. Find out how The Outsider stacks up against other HBO TV shows.

Will HBO cancel or renew The Outsider for season two? The ratings were okay to start and increased as the season progressed. My sense is that, while this was envisioned as a one-and-done series, there’s a very good chance that it will be renewed for a second season. I’ll update this page with breaking developments. Subscribe for free alerts on The Outsider cancellation or renewal news.

What do you think? Were you hoping that The Outsider TV show would be renewed for a second season, potentially with a new case?

how was the book itself? i haven’t read it yet but there must be an ending to this story like others and because i haven’t yet finished watching all episodes of season 1 so if that beast is not eliminated in the first season so naturally there should be season 2 to get the story to its end! and somehow it is obvious that the ending is the time beast is gone one way or another

Yes yes i love the outsider . i really hope they continue it for at least 2 more seasons . its the only reason we kept h.b.o. . If it don’t come back on it will save me money , but i really would weather spend the money and watch the show .

YES! I want more! Loved it!

I really like Stephen King, The Outsider is a wonderful intense series , that has you on the edge of your seat. Every time a episode comes on your waiting for the next episode to watch. Really hoping they don’t leave us hanging and there’s a second season coming

Yes please love that show has to be another season of the outsiders!!!

Loved the series! Please come back!

Yes absolutely love it! It has to come back for a second season !!!

I have been looking at the series while on the treadmill at the gym. The hour goes by quickly, but every day I say I am not looking at it again because it is so dark and depressing. But the following day I’m back. On the last episode and truthfully relieved. Sucker for punishment I guess.

Absolutely this show should be renewed!! WTF??! I have to know.. you can not leave us hanging like that…

Yes love this series and a great cast bring it back!!

Series of this caliber (True Detectives, The Killing, Fargo, etc) are so few and far between, intelligent viewers deserve a 3 season run at the very least! Come on man!!!

Yes, we need a season 2 of Outsider! What a wonderful show!!!

Of course ”The Outsider” should be renewed! The loose threads are still untied, nothing has been satisfactorily explained, not to mention it’s totally engrossing and has a terrific cast!
Jason Bateman? Stephen King?.. come ON HBO!!
I’m tired of investing hours in a gripping show only to find it ends abruptly and w/o resolution!