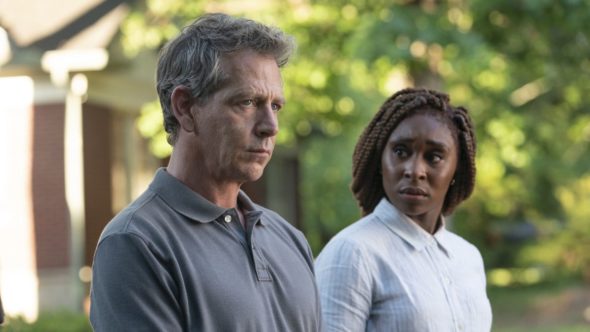 TV show description:
A drama that’s based on the Stephen King novel, The Outsider TV series explores the investigation into the gruesome and mysterious murder of a young boy in Georgia.

While he and his wife (Winningham) are still grieving the recent death of their son, police detective Ralph Anderson (Mendelsohn) sets out to investigate the mutilated body of 11-year-old Frankie Peterson when he’s found murdered in the woods. The mysterious circumstances surrounding this horrifying crime leads Ralph to bring in an unorthodox private investigator, Holly Gibney (Erivo). She has uncanny abilities that Ralph hopes will help explain the unexplainable.

With eyewitnesses and physical evidence pointing to the guilt of local teacher and baseball coach Terry Maitland (Bateman), Ralph makes a very public arrest but is perplexed by Terry’s seeming indifference to hiding his crime. After Terry’s wife, Glory (Nicholson), calls their attorney, Howie Salomon (Camp), for assistance, a bewildered Terry produces an ironclad alibi during interrogation. Meanwhile, Howie calls in his private investigator, Alec Pelley (Bobb), to look into Terry’s side of the story.

Series Finale:
Episode #10 — Must/Can’t
The group finds itself in a climactic showdown in their last-ditch effort to root out El Coco.
First aired: March 8, 2020.

What do you think? Do you like The Outsider TV show? Do you think it should be cancelled or renewed for another season?

I think the show should be renewed it was a great show! It would be great to see what’s going to happen in the next episode

I think a second season would be great. There were quite a few questions that didn’t get answered in the first one

I love this series and my wish is for a second season…I have not seen acting this excellent in a long time…I felt like this was really something that could have happened….please make a second season

This is the best HBO original series!