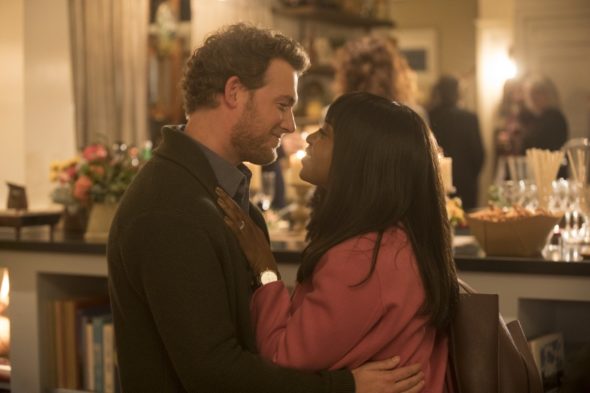 Do Greg, Audrey, and the family live their best lives the first season of the Here and Now TV show on HBO? As we all know, the Nielsen ratings typically play a big role in determining whether a TV show like Here and Now is cancelled or renewed for season two. Unfortunately, most of us do not live in Nielsen households. Because many viewers feel frustration when their viewing habits and opinions aren’t considered, we’d like to offer you the chance to rate all of the Here and Now season one episodes here.

An HBO comedy-drama, Here and Now stars Tim Robbins, Holly Hunter, Jerrika Hinton, Daniel Zovatto, Raymond Lee, Sosie Bacon, Andy Bean, Joe Williamson, Peter Macdissi, Avynn Crowder-Jones, Stephanie Arcila, and Erin Carufel. The series centers on a progressive white couple, Greg (Robbins) and Audrey (Hunter), and their multi-ethnic brood, as well as a contemporary Muslim psychiatrist (Macdissi). While they don’t always make the best choices in this world gone mad, they’re all struggling to live authentically in the here and now, because that’s all there is.

What do you think? Which season one episodes of the Here and Now TV series do you rate as wonderful, terrible, or somewhere between? Should HBO cancel or renew Here and Now for a second season? Don’t forget to vote, and share your thoughts, below.

This was a good show and deserved another season to at least wrap up the storyline.

This serie seems to be far too good to be successful, to earn great ratings. This story is so overwhelming, gives such a wide perspective on human existence in these confusing times. Each episode surprises the spectator in telling original and provocative stories, it’s a pity the great public seems not to be prepared for this and new insights . Hopefully this serie will prove her values the coming years.

LOVE this series. Please continue it!

This show started off slowly but once character development ensued, it became a series I looked forward to watching on Amazon prime videos each Monday! I hope it will be picked up for a second series as I love the commitment of the actors and how it is unfolding. Please renew this thought – provoking series !!!!

I absolutely love this show. Please continue with more seasons.

Awesome show. Give it more seasons. It’s a win.

Love this show, so hoping for season 2. Can’t wait to see what’s next.

THIS SHOW GOT ME HOOKED FROM EPISODE ONE, iM LOOKING FORWARD TWO ANOTHER SEASON, LUV THIS SHOW…

My husband got me watching this and we are can’t wait to here what comes next in each episode – we even try to stay up late to watch it, which we rarely do:)