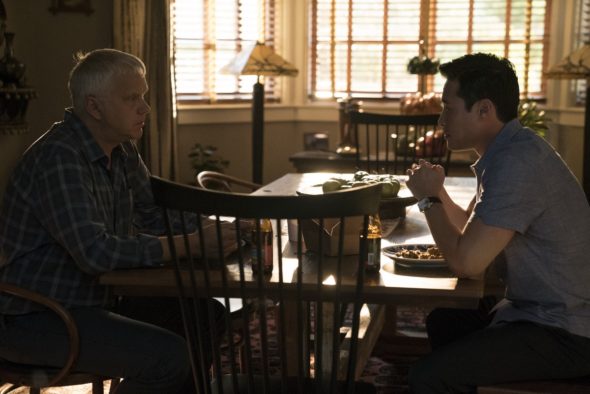 TV show description:
From creator Alan Ball who executive produces with Peter Macdissi, the Here and Now TV show is a comedy-drama about life in modern-day America. The series follows a progressive white couple, Greg (Robbins) and Audrey (Hunter), and their multi-ethnic brood, as well as a contemporary Muslim psychiatrist (Macdissi).

When Audrey and Greg met and fell in love at Berkeley, they decided to adopt children from around the globe. As this decision was born of a desire to do good in the world, they chose to adopt from places where the US had done harm.

Today, they have four children. Their son Duc (Lee) is from Vietnam, while Ramon (Zovatto) hails from Colombia. They adopted daughter Ashley (Hinton) from Nigeria, and their youngest child is a biological daughter, Kristen (Bacon). Together this family is trying to find their way in a world hellbent on going mad.

The characters experience life in unique ways. Who they are, how they identify, and how they know themselves to be perceived all influence their perspectives on various situations. While they don’t always make the best choices, they’re all struggling to live authentically.

About the human condition at its heart, Here and Now ponders how people keep hope alive, even in these dark and confusing times.

What do you think? Did you like the Here and Now TV series? Should this TV show have been cancelled or renewed for a second season on HBO?

Here and Now is a great drama that deals with many of the struggles of family life. These struggles are not usually all in one family, but it is quite a microcosm of society today. I really enjoyed this series and would like to see it continued.

Why was show canceled? I never heard of it. No advertising nothing. Then looking for something new to watch and find it’s canceled!! Just like the other Tim Robbins show with Jack Black hilarious canceled. Maybe if HBO advertised this show it wouldn’t have been canceled. I love it. Now again another show leaving everyone in limbo!

Loved this show, sad to see it go;(

OMG…this became my new favorite show! How could it become cancelled. So disappointed with HBO! Last year I watched Vinyl and then that was cancelled. Thank goodness Big Little Lies is coming back! I never heard of Here and Now, the show did bit have a chance perhaps because I really did not see any advertising but I was looking for something to watch one evening and I happened to see a couple minutes of Here and Now and became hooked. I thought maybe it was like a This is Us but with a twist. I think HBO is making… Read more »

Like you, I had never heard of this show, no advertising or anything. I was looking for something to watch last night and got hooked on it! I am on episode 6, now I am so sad/mad they are cancelling. They should do one more season and publicize it!

Same here! I love Tim Robbins. Never heard of this show. Been binge watching only to find out another show I really like is canceled. HBO why keep canceling good, interesting, different shows?

Glad I checked this website since I haven’t watched any episodes. Now I won’t bother and will simply “delete” all of them.

I really enjoyed this show and was already looking forward to season 2, which I was positive would air! It was in a class of it’s own, like other Allen Ball creations. There were so many unanswered questions. Ok, now I’m sad.

No this should not be cancelled!!! a lot of people probably haven’t gotten to yet. it’s a really good show great characters, actors & great story!!

I love that show. The world needs this show. I hope it will return.

Why would you cancel after the eruption? How are we to know is that what is visions were about? Please bring them back to hear how the rest of the families do or heal. Watch it over and over!

Please renew. However unlikely from the ratings. Hate losing great shows in lieu of trash

It is superb. Quite superb. Renew

I agree the warnings had to b his visions or his time to leave his earthly body.