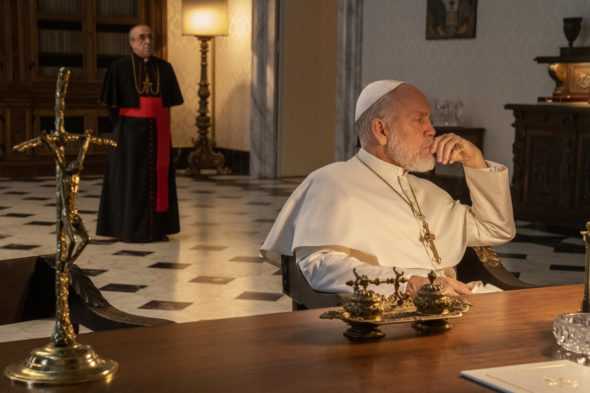 Is there more story to tell? Has The New Pope TV show been cancelled? Will it be renewed for a second season on HBO? The television vulture is watching all the latest cancellation and renewal news, so this page is the place to track the status of The New Pope, season two. Bookmark it, or subscribe for the latest updates. Remember, the television vulture is watching your shows. Are you?

The first season of The New Pope averaged a 0.04 rating in the 18-49 demographic and 235,000 viewers. Find out how The New Pope stacks up against other HBO TV shows.

Will HBO cancel or renew The New Pope for season two? My guess is that this series will come to a natural conclusion, just as its predecessor The Young Pope did. If HBO wants to continue the story somehow, it seems likely that the channel will give the continuation a new title. I’ll update this page with breaking developments. Subscribe for free alerts on The New Pope cancellation or renewal news.

What do you think? Do you hope The New Pope TV show will be renewed for a second season?

Please, please..renew this series!!!!! Was the best and most riveting show on tv..Ever. Jude Law and John Malcovich..outstanding.