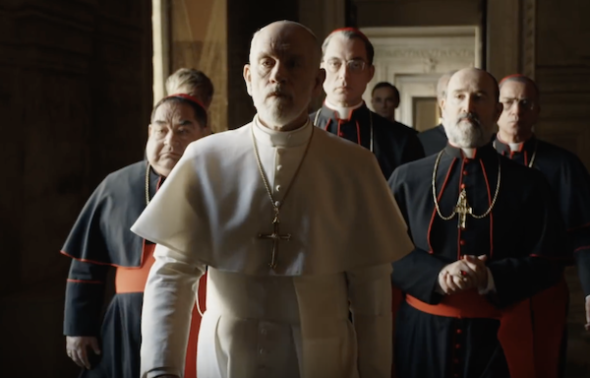 The New Pope is coming to HBO in January, and now fans are being given a new look at the series, which stars Jude Law and John Malkovich.

HBO released a brand new trailer for the series on Sunday, and it features John Malkovich in his role, and he definitely isn’t the usual type that becomes a pope.

In addition to Law and Malkovich, viewers will see Silvio Orlando, Javier Cámara, Cécile de France, Ludivine Sagnier, and Maurizio Lombardi from The Young Pope. Per Deadline, new faces will be seen in The New Pope. They include Mark Ivanir, Henry Goodman, Ulrich Thomsen, and Massimo Ghini.

Check out the new trailer for The New Pope below. An exact premiere date has not been released.

What do you think? Do you plan to check out The New Pope?

As the airing date has been set for January 2020, I’m sharing some links to pics of some of the many new characters joining John Malkovich such as Russian actress Yuliya Snigir, Americans J.David Hinze and Tomas Arana, Danish actor Ulrich Tomsen and Massimo Ghini of Italy who were on the red carpet in Venice in September. Sharon Stone and Marilyn Manson, as mentioned, will make guest appearances. Not all of the new characters are portrayed at the moment but here are a few that are. Paolo Sorrentino’s Instagram account https://www.instagram.com/paolosorrentino_real/ The New Pope IMDb photos page https://www.imdb.com/title/tt7157248/mediaindex?ref_=tt_pv_mi_sm John Malkovich… Read more »

Yes, can’t wait. Anything with John Malkovich is worth watching!