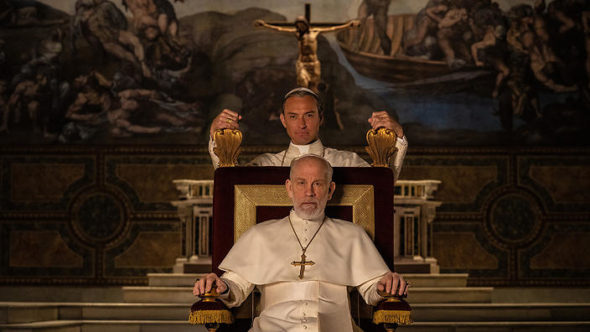 TV show description:
A historical drama series, The New Pope picks up where The Young Pope TV show left off, with Lenny Belardo (Law), known as Pope Pius XIII, in a coma.

The new pope seems ideal, but he conceals secrets and has a certain fragility, and Voiello immediately understands that it will not be easy to replace the charismatic Pius XIII. Hanging between life and death, Lenny Belardo has become a Saint, with thousands now idolizing him, fueling the contrast between fundamentalisms.

Meanwhile, the Church is under attack from external threats and scandals striking the symbols of Christianity and risking irreversibly devastating the hierarchies. As always, however, in the Vatican, nothing is what it seems.

Good and evil proceed arm-in-arm towards history, and to reach the showdown, events must take their course.

What do you think? Do you like the The New Pope TV show? Do you think it should be cancelled or renewed for another season?

It’s fantastic. It would be a sin not to extend it.

Renewed for sure it is a gripping take on politics and religion!!!! A definite must watch. HBO and Sky please renew this series it is amazing!!! Please and Thank You!!

This is a perfect show….absolutely mesmerizing in every factor! Bravo!

Please, DO NOT CANCEL The New Pope!!
I love this show & all the messages it relates!
Great acting & a wonderful cast!

This is the best show on TV on any platform. The artistic and bold visuals, music, sets, costumes, and accurate portrayal of the subject matter in the most artistic and moving manner requires that there be at least a Season 3. I haven’t watched the finale yet, but if it leaves the door open, I hope HBO and the show runners and actors are up for more of Lenny, Sir Braxton, and Voiella, et al. Though I would hope Season 3 would not be three years off, if it is, it would be worth the wait if it keeps pace… Read more »

absolutely should be renewed …it’s brilliant !

The show is brilliant and should continue. Everything about the show is fantastic.