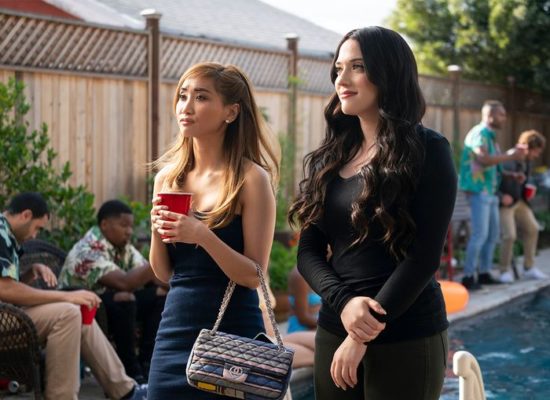 Can her female friends help Jules find her way in the first season of the Dollface TV show on Hulu? As we all know, the Nielsen ratings typically play a big role in determining whether a TV show like Dollface is cancelled or renewed for season two. Hulu and other streaming platforms, however, collect their own data. If you’ve been watching this TV series, we’d love to know how you feel about the first season episodes of Dollface here. *Status update below.

A Hulu single-camera comedy series, Dollface stars Kat Dennings, Brenda Song, Shay Mitchell, and Esther Povitsky with Connor Hines, Beth Grant, Brianne Howey, Vella Lovell, Malin Akerman, Goran Visnjic, and Shelley Hennig in recurring roles. Created by Jordan Weiss, the series follows a young woman named Jules Wiley (Dennings), a web designer at a wellness company called Woöm. After being dumped by her longtime boyfriend, Jeremy (Hines), Jules must deal with her own imagination in order to literally — and metaphorically — re-enter the world of women and rekindle the female friendships she left behind. Along the way, she befriends Izzy Levine (Povitsky), a co-worker, and reconnects with Madison Maxwell (Song) and Stella Cole (Mitchell), Jules’ best friends from college.

What do you think? Which season one episodes of the Dollface TV series do you rate as wonderful, terrible, or somewhere between? Do you think that Dollface on Hulu should be cancelled or renewed for a second season? Don’t forget to vote, and share your thoughts, below.

*1/17/20 update: Hulu has renewed the Dollface TV series for a second season.

I was iffy on the show at first, but it grew on me. It’s strange and out there at times, but the characters play off of each other so well and it’s witty and different. The guest stars are a delight, too. It’s not perfect, but it’s a good fun show with a lot of laugh out loud moments. If you’re looking for a serious take on femininity this probably isn’t the show for you. But if you’re looking for something fun and carefree about life and friendship that will ultimately make you feel better about life…it’s Dollface. I have… Read more »

Absolutely LOVE this show! It was well written, silly, and addressed some serious issues thoughtfully. So sad we gobbled up the season so quickly, but it was too good to stop! Thanks Hulu for the LOLs!!