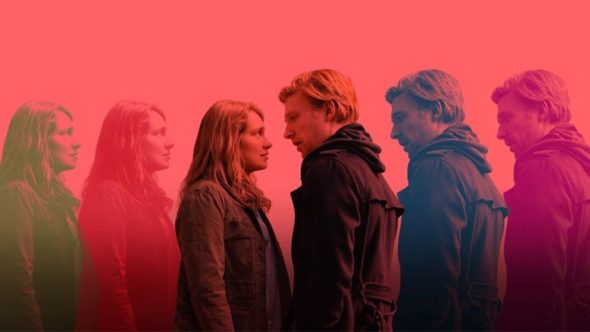 HBO has had mixed ratings success with comedy shows and the channel’s newest effort, Run, is also a thriller series. Is this unusual combination a recipe for success? Will Run be cancelled or renewed for season two? Stay tuned. *Status update below.

A romantic comedic thriller series, the Run TV series stars Merritt Wever and Domhnall Gleeson, with recurring guest stars Phoebe Waller-Bridge, Rich Sommer, Tamara Podemski, and Archie Panjabi. In college, Ruby Richardson (Wever) and her boyfriend, Billy Johnson (Gleeson), made a pact. They promised that, if either one of them texted the word “RUN” and the other replied with the same, they would drop everything and meet in Grand Central Station and travel across America together. Now, 17 years later, Ruby is shaken out of her humdrum suburban life with that text and she walks away from her ordinary suburb life and flies to New York. There, she reunites with Billy and boards a cross-country train. As their adventure begins, Ruby and Billy fight the tension that still exists between them while attempting to root out each other’s secrets.

What do you think? Do you like the Run TV series on HBO? Should it be cancelled or renewed for a second season?

Looooooooove this show!! I think the ratings for all shows at this time are just weird. People are cancelling memberships to save money left and right. This show is SO good from the stunning writing to the unbelievable chemistry between the leads. It’s fast, funny, witty and romantic. Please do a second season!!

The ratings look really bad. Maybe HBO Max will help it out. I don’t see it getting another season.

I love the new HBO show RUN. My husband and i
We’re looking for something new to watch. We hadn’t seen any trailers for RUN. Just decided to try it. Watched
6 shows til 5:30A. Great!!!! Please more!!!

I happened upon this show by accident and I’m already involved in the characters. Such a unique and original show. Well written and acted.