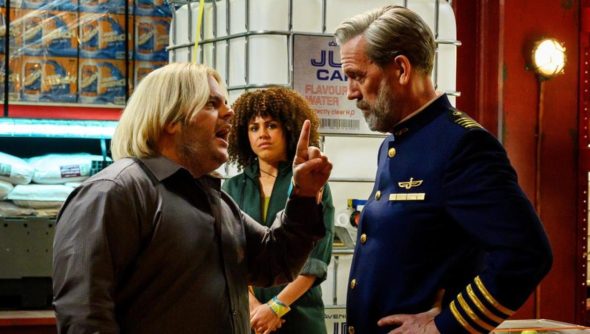 HBO is planning further voyages of the Avenue 5 cruise ship. The cable channel has renewed the comedy series for a second season.

Airing on Sunday nights, the Avenue 5 TV show stars Hugh Laurie, Josh Gad, Zach Woods, Nikki Amuka-Bird, Rebecca Front, Lenora Crichlow, Suzy Nakamura, and Ethan Phillips. The story is set 40 years in the future when traveling the solar system is a booming, multibillion-dollar business. Ryan Clark (Laurie) is the confident and suave captain of “Avenue 5.” It’s a space cruise ship that features luxury amenities like gourmet buffets, a spa, an observation deck, and yoga classes. When the ship suddenly encounters technical difficulties, it’s up to Ryan and his crew to calm the disgruntled passengers and find a way to deal with unexpected events onboard – though they may or may not be equipped for the task.

Four episodes of the first season of Avenue 5 have aired thus far and average a 0.12 rating in the 18-49 demographic and 411,000 viewers. It’s a middle-of-the-road performer for HBO in live+same day viewing.

NEW YORK, February 13, 2020 – Following the debut of the first season on January 19, comedy series AVENUE 5 has been renewed for a second season, it was announced today by Amy Gravitt, Executive Vice President, HBO Programming.

Created and executive produced by Armando Iannucci of “Veep,” AVENUE 5 is set forty years in the future when traveling the solar system is no longer the stuff of sci-fi fantasy, but a booming, multibillion-dollar business. The series kicked off its nine-episode season January 19.

“We’ve loved every minute of Avenue 5’s inaugural voyage,” says Gravitt. “Armando Iannucci and his team are masters of smart and incisive comedy, and the ensemble cast, brilliantly captained by Hugh Laurie, is second to none. We can’t wait to see what’s in store for our hapless heroes in season two.”

“It was so great to be back again with HBO for the first season of AVENUE 5, so I’m doubly thrilled that HBO have now seen fit to put Captain Ryan Clark and his passengers and crew through even more physical and emotional hell next year too,” says Iannucci. “Nobody provides angst-ridden laughs better than Hugh Laurie, and we’re looking forward to seeing what further impossible situations and existential crises we can plunge him, Josh Gad and the rest of our fantastic cast into next. To the end of season one and beyond (into season two)!”

“It’s thrilling to discover that space isn’t finite after all,” says Laurie. “I’m very excited to be continuing on this journey with Armando and HBO, and also an amazing group of actors and writers who make me laugh every day. Here’s to the future!”

What do you think? Have you been watching the first season of the Avenue 5 TV show on HBO? Do you think you’ll watch season two?

how many episodes will there be in season 1 ?

Trevor Kimball
Author
Reply to  question for anyone

First off I love Hugh and I love Science Fiction so I figured I would love this show. However it is just unwatchable and not at all funny. I watched all four episodes so far waiting for it to get better but it just never does. Last episodes was filled with nothing but poop jokes which stopped being funny sometime after I turned 8. HBO must wed desperate if they have renewed this show based on what we have seen so far.