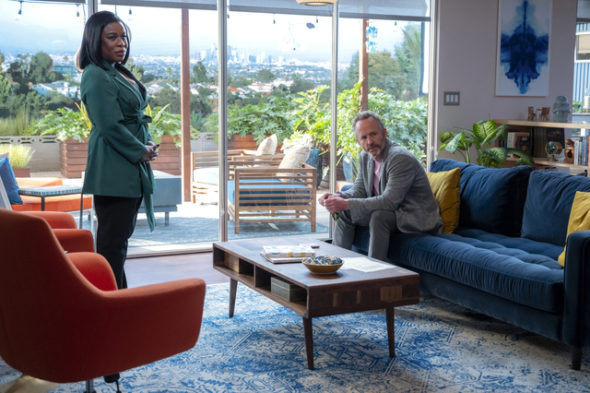 How long will this doctor be “in”? Has the In Treatment TV show been cancelled or renewed for a fifth season on HBO? The television vulture is watching all the latest cancellation and renewal news, so this page is the place to track the status of In Treatment, season five. Bookmark it, or subscribe for the latest updates. Remember, the television vulture is watching your shows. Are you?

Airing on the HBO cable channel, the In Treatment TV show is a reimagining of the 2008-10 series. It stars Uzo Aduba as Dr. Brooke Taylor, an observant and empathetic therapist. The season also stars Anthony Ramos, Liza Colón-Zayas, John Benjamin Hickey, Quintessa Swindell, and Joel Kinnaman. Set in present-day Los Angeles, the season brings a diverse trio of patients in session with Brooke to help navigate a variety of modern concerns. Issues such as the global pandemic and recent major social and cultural shifts are a backdrop to the work Brooke undertakes – all while she deals with complications in her own personal life.

The fourth season of In Treatment averaged a 0.03 rating in the 18-49 demographic and 125,000 viewers in the live+same day ratings (includes all DVR playback through 3:00 AM). Find out how In Treatment stacks up against other HBO TV shows.

Will HBO cancel or renew In Treatment for season five? The ratings are small but the show has a recognizable name, doesn’t appear to be too expensive to produce, and could change actors as needed. I think it will be renewed. I’ll update this page with breaking developments. Subscribe for free alerts on In Treatment cancellation or renewal news.

2/18/22 update: The revival of In Treatment has been cancelled on HBO.

What do you think? Were you hoping that the In Treatment TV show would be renewed for a fifth season? Are you sorry that HBO cancelled this TV series, instead?

A female 63 and her 23 year old daughter

This is a great show it just wasn’t give the correct “support “ I have told so many people about the show … they say they have never heard of it… you have to advertise these shows some where like you did gilded age .. celebrate them. It’s a great show !!!!

I love this show! Really looking forward to and hoping for a fifth season!

Given the mental health crisis in pandemic USA, particularly among young adults facing an escalation of anxiety, depression, isolation/loneliness, demotivation, existential angst, anger, alienation, etc., it seems that In Treatment could serve as a venue for speaking to this epidemic of emotional pain and suffering. Concurrently, it would seem an inopportune time to cancel such a relevant program, almost a sort of cancel culture event against an age cohort facing the inheritance of such pervasive fear and desperation on all sides. I would hope that the network wisdom would demonstrate its commitment to its viewing audience by furthering such opportunities… Read more »

I ABSOLUTELY think IN TREATMENT should be RENEWED. In fact, this drama is THE BEST I have ever watched on HBO. UZO ADUBA is PHENOMENAL as the therapist. If you haven’t checked it out, you really should. If IN TREATMENT had been a movie instead of a mini-series, her performance in this role would be OSCAR worthy. She is truly that GOOD!