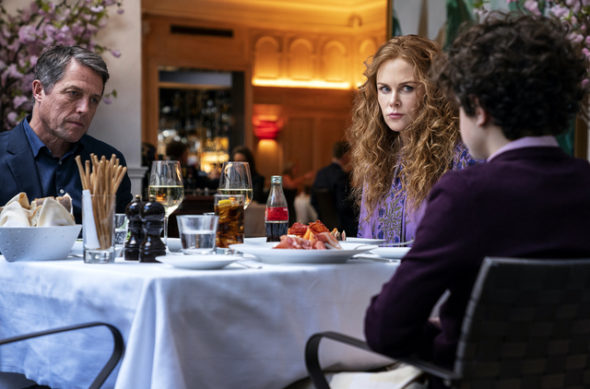 Will this family stay together? Has The Undoing TV show been cancelled or renewed for a second season on HBO? The television vulture is watching all the latest cancellation and renewal news, so this page is the place to track the status of The Undoing, season two. Bookmark it, or subscribe for the latest updates. Remember, the television vulture is watching your shows. Are you?

Airing on the HBO cable channel, The Undoing TV show that stars Nicole Kidman, Hugh Grant, Edgar Ramirez, Noah Jupe, Lily Rabe, Sofie Gråbøl, Matilda De Angelis, Ismael Cruz Córdova, and Donald Sutherland. The story revolves around a married couple, Grace (Kidman) and Jonathan Fraser (Grant). Grace is a loving wife, devoted mother, and successful therapist whose life unravels when she makes discoveries about her husband’s past. Left behind in the wake of a spreading and very public disaster and horrified by the ways in which she has failed to heed her own advice, Grace must dismantle one life and create another for her 12-year-old-son Henry (Jupe) and her family.

The first season of The Undoing averaged a 0.13 rating in the 18-49 demographic and 1.10 million viewers. Find out how The Undoing stacks up against other HBO TV shows.

Will HBO cancel or renew The Undoing for season two? Though the series has been promoted as a “limited series”, it feels like a “mini-series” with a natural conclusion. Still, this series is a reteaming of Kidman and executive producer David E. Kelley who previously worked together on HBO’s Big Little Lies. That series was intended to be one season but was renewed for a second and may end up getting a third someday. So, anything can happen but, for now, I don’t think there will be a second season for The Undoing. I’ll update this page with breaking developments. Subscribe for free alerts on The Undoing cancellation or renewal news.

11/29/20 update: It is clear that The Undoing won’t be returning for a second season.

What do you think? Were you hoping that The Undoing TV show would be renewed for a second season on HBO?

Omg on episode 3 hooked on it so good love this show who done it Murder mystery crime show miniseries interesting one.

Please, please renew … the best mini series I have seen in a long time. Don’t disappoint us!

Actually dude no more it over Hugh Grant, Nicole Kidman so good actress and Actor you will see in theater movies story ended done. Even love those two of them regular tv show worth watching too,

Yes, I love it! Please renew!

Yes, I want a season 2 of The Undoing! The series is riveting with Nicole and Hugh! The entire production is leading edge television!

Season 1 of The Undoing was excellent. Alot of suspense and who done it. Nicole and Hugh were wonderful together. Definitely a different character and role hugh is playing. He is doing an excellent job. You have to renew Season 2

Yes to a second series of the Undoing!

The Undoing is a fascinating series and I’d like to see another season!

LOVE THIS SHOW! RIVETING, COMPELLING, GOTTA GET MY NEXT UNDOING FIX!!!!