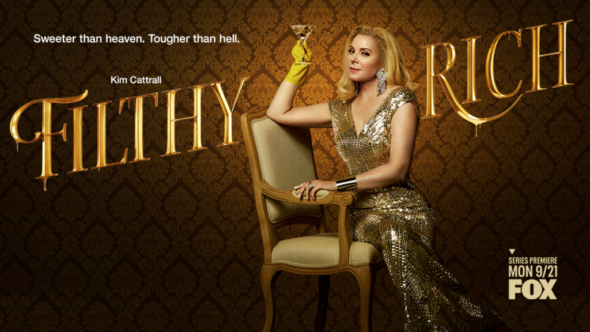 Actress Kim Cattrall is best known for her role in the Sex and the City dramedy series, which ran for six seasons on HBO. She’s worked on many TV series since then but none have had the same success. Will her new Filthy Rich TV show be a hit in the ratings? Will this FOX series be cancelled or renewed for season two? Stay tuned. *Status Update Below.

A Southern Gothic family drama series, the Filthy Rich TV show stars Cattrall, Corey Cott, Olivia Macklin, Aubrey Dollar, Melia Kreiling, Benjamin Levy Aguilar, Mark L. Young, Steve Harris, Aaron Lazar, and Gerald McRaney. The Monreaux clan is a mega-rich Southern family that’s famous for creating a wildly successful Christian television network. On the cusp of launching a digital retail arm of the company, patriarch Eugene (McRaney) dies in a plane crash. His wife, Margaret (Cattrall), is left to take charge of the family business and is seen as a bigger-than-life leader to the religious and Southern communities. Eugene’s apparent death greatly impacts Margaret and the two adult Monreaux children but the whole clan’s lives are thrown into turmoil when it’s revealed that Eugene has named three illegitimate kids in his will. With plenty of plot twists and turns — mixed in with lies, deceit, and shade from every direction — this is a world in which everyone has an ulterior motive – and no one is going down without a fight.

What do you think? Do you like the Filthy Rich TV series on FOX? Should it be cancelled or renewed for a second season?

I love this show and would
Like to see where writers take it in a second season!
Please do not cancel…