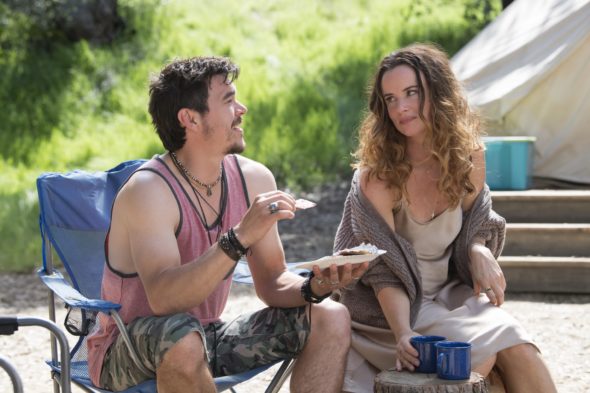 Will HBO viewers be happy campers? Is the Camping TV show cancelled or renewed for a second season on HBO? The television vulture is watching all the latest cancellation and renewal news, so this page is the place to track the status of Camping season two. Bookmark it, or subscribe for the latest updates. Remember, the television vulture is watching your shows. Are you?

An HBO comedy, Camping stars Jennifer Garner, David Tennant, Juliette Lewis, Arturo Del Puerto, Ione Skye, Janicza Bravo, Brett Gelman, Bridget Everett, Cheyenne Haynes, Duncan Joiner, Chris Sullivan, and Rhiannon Leigh Wryn. When a group of friends retreats to the lackluster Brown Bear Lake campsite for a birthday celebration, control-freak Kathryn McSorley-Jordell (Garner) is determined that everything will go off without a hitch. There’s only one thing Kathryn never counted on — another woman coming along to undermine all her plans. Their back-to-nature camping trip soon tests the marriages and friendships of the campers involved.

The first season of Camping averaged a 0.09 rating in the 18-49 demographic and 340,000 viewers. Learn how Camping stacks up against the other HBO TV shows.

Will cancel or renew Camping for season two? The ratings were low and the co-creators appear to have no interest in making a second season. Could that change? Subscribe for free Camping cancellation or renewal alerts.

What do you think? Were you hoping that the Camping TV show would be renewed for a second season?

Would love a season 2 of Camping on HBO

Season 2 would be awesome, season 1 was so funny

I have been looking forward for a season 2

LOVE this show. So funny.