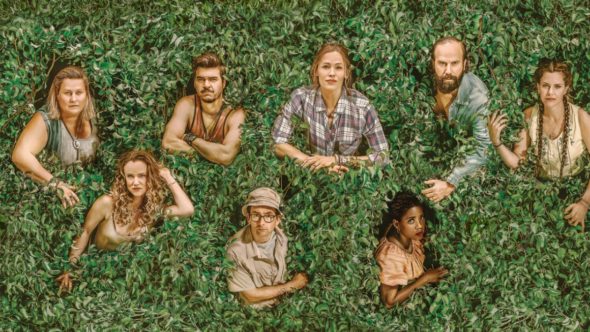 TV show description:
From Lena Dunham, Jenni Konner, and John Riggi, the Camping TV show is a comedy based on the British series of the same name, by Julia Davis. The story centers around a back-to-nature camping trip that soon tests the marriages and friendships of the campers involved.

When a group of friends retreats to the lackluster Brown Bear Lake campsite for a birthday celebration, control-freak Kathryn McSorley-Jordell (Garner) is determined that everything will go off without a hitch. There’s only one thing Kathryn never counted on — another woman coming along to undermine all her plans.

Kathryn’s husband, Walt (Tennant), is a compliant husband and devoted father. Although he’s always kept the male contingent of the gang together, he’s starting to feel a growing discontentment with his circumstances.

A CPA and reiki healer, Jandice (Lewis) seems to live an ideal life, but appearances can be deceiving. Also along for the festivities is Miguel (Del Puerto), a man in the midst of a midlife crisis, who is as unstable as his age-inappropriate wardrobe and life choices suggest.

Carleen (Skye) is Kathryn’s timid sister who devotes herself to activities like crocheting, to pass the lonely hours. Nina-Joy (Brava) is the type of woman people can always count on, but lately, things between her and Kathryn have been tense, due to a broken confidence which could upend the whole weekend.

Nina-Joy’s husband, George (Gelman), is a bit goofy, but he’s a loyal soul who is always up for a good time. He’s pretty fixated on his best friend Walt and keeps his growing rage locked inside. Harry (Everett), on the other hand, is a hard-edged nature devotee. She feels almost as passionate about her wife as she does about every other woman and, of course, her weapons.

The celebration kicks off amidst heightened emotions, with tensions of all sorts lurking beneath the surface, along with memories the gang would rather forget.

What do you think? Do you like the Camping TV series? Should this TV show have been renewed for another season on HBO?

The show was great it should’ve had a season 2..HBO should be ashamed of themselves..The casting couldn’t have been better..Everyones energy bounced off of each other..All around great show..I enjoyed every minute of it.