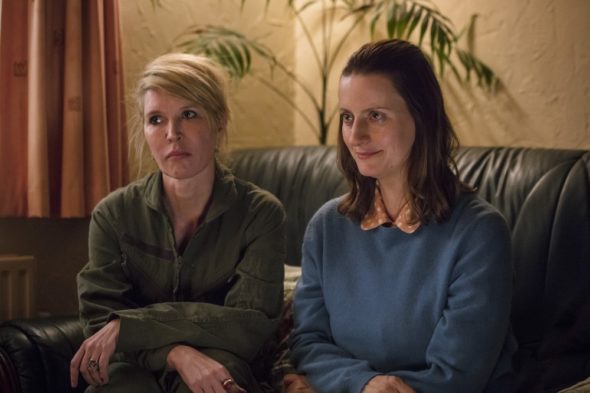 HBO is ready for a new romance. This week, the network announced the premiere date for their new TV show, Sally4Ever.

The comedy series SALLY4EVER will begin its seven-episode season SUNDAY, NOV. 11 (10:30–11:00 p.m. ET/PT), it was announced today by Amy Gravitt, executive vice president, HBO Programming. Produced for HBO and Sky Atlantic by Hush Ho and Various Artists Ltd., the show was created by Julia Davis (creator of the original British series “Camping”), who also executive produces, stars in, and wrote and directed every episode.

“We’ve been in comedy awe of Julia for many, many years,” said Gravitt. “We’re thrilled to be a part of her latest stroke of genius, and to be working alongside Sky One, Hush Ho and Various Artists in the process.”

In SALLY4EVER, Sally (Catherine Shepherd) is about to marry David (Alex Macqueen), her nebbish boyfriend of ten years, when she encounters the charismatic Emma (Julia Davis). The two fall into a romantic relationship, but what starts out as an exciting and sexy fling takes an unexpected turn when Emma reveals herself to be a nightmare.

The story of a love affair that quickly spirals out of control, SALLY4EVER’s fearless exploration of love, sex and obsession could only come from the outrageous mind of Julia Davis.

Sally (Catherine Shepherd), a mid-level marketing executive, is bored witless after a ten-year relationship with her fawning, milquetoast partner David (Alex Macqueen), who is desperate to get married. Although she reluctantly agrees to the union after a tearful plea, a chance encounter with Emma (Julia Davis), a Bohemian singer and actress, propels Sally into unchartered sexual and emotional terrain that spells the end of her engagement, and the beginning of what could be an even more challenging affair.

It’s Sally’s (Catherine Shepherd) birthday. After a subdued celebration with co-workers Nigel (Julian Barratt), Eleanor (Felicity Montagu) and Mick (Steve Oram), Sally heads home for a surprise dinner with her stodgy parents (David Cann, Georgie Glen), who are shocked when Emma (Julia Davis) shares details of her lesbian relationship with their daughter. Following a distressing phone call, David (Alex Macqueen), Sally and Emma take the long trip to his parents’ house, where Emma begs Sally to join her in the guest room.

As cracks in her relationship with the cloying Emma (Julia Davis) emerge, Sally (Catherine Shepherd) agrees to visit a therapist, Belinda (Vicki Pepperdine), where she’s forced to share uncomfortable realities about the couple’s private life. After a chance encounter with Sally’s longtime friend Kate (Robin Weaver) and her husband, Dan (Seb Cardinal), Sally and Emma are invited to dinner, where Emma presses Dan, a well-known director, for a role in one of his films. Meanwhile, Nigel (Julian Barratt) finds it increasingly difficult to fend off the advances of an overbearing Eleanor (Felicity Montagu).

Julia Davis created and starred in the comedy series “Nighty Night,” “Hunderby” and “Camping,” on which the upcoming HBO series of the same name, starring Jennifer Garner, is based. Davis’ other acting credits include “Phantom Thread,” “Black Mirror” and “Little Britain.”

What do you think? Are you a fan of British comedies? Will you watch Sally4Ever?

I adore this show! Please please let there be a season 2!! And much more of Nigel this time☺️