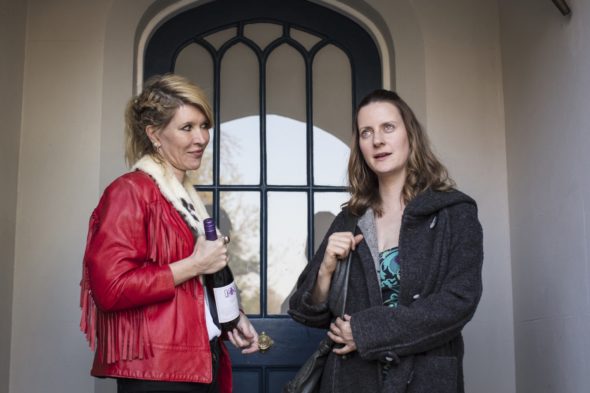 TV show description:
From creator Julia Davis, the Sally4Ever TV show is a British comedy centering on Sally (Shepherd), a mid-level marketing executive on the cusp of a promotion. For a decade, Sally has lived a staid life in suburbia with her partner, David (Macqueen). When he finally shakes things up a bit by proposing marriage, Sally panics.

Bland, timid David desperately wants their union, so Sally acquiesces. When the reality of spending the rest of her life with him sinks in though, she embarks on a torrid affair with Emma (Davis), a free-spirited entertainer, who is just oozing with charisma. Initially, their liaison feels like an exciting new romance, but the situation soon sours.

Although charming at first, Emma turns out to be a bonafide horror-show. It is not long before their sexy romance spins out of control and into the realm of obsession.

Series Finale:
Episode #7
A romantic getaway at a posh castle estate goes awry for Emma (Julia Davis). Sally (Catherine Shepherd) falters after an otherwise-pleasant encounter with actor Sean Bean. Back in London, Sally and Emma run into a former coworker of Sally’s, who has embraced a new outlook on life.
First aired: December 23, 2018.

What do you think? Do you like the Sally4Ever TV series? Should this HBO TV show have been cancelled or renewed for a second season?

This was the most deliciously, hilarious, brilliant show. It haunts me in the most amazing way. I need more. Please!

This is the most disgustingly horrid show that has ever been aired on tv. Please cancel this unfunny shock begging show.