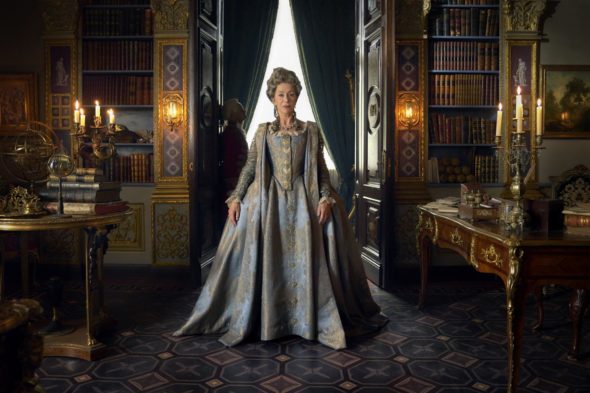 Catherine the Great has arrived. HBO just released the first image of Helen Mirren and new details from their upcoming TV show.

The historical drama “will chart the latter years of Catherine’s 34-year reign, as she builds Russia’s reputation as one of the great powers of Europe.” Mirren plays Catherine, Jason Clarke plays Grigory Potemkin, and Joseph Quinn will play Paul, Catherine’s son and heir.

HBO has not yet announced a premiere date for Catherine the Great, but you can read more info below:

Set against the politically tumultuous and sexually charged court of Russian empress Catherine the Great, who wielded supreme power throughout Russia for nearly half of the 18th century, the limited series follows Catherine towards the end of her reign during her passionate affair with Grigory Potemkin. Amid scandal, intrigue and immense conflict, they develop a unique and devoted relationship, overcoming their adversaries and together serving as the architects of modern-day Russia.

Currently shooting in palaces and sets across Russia, Latvia and Lithuania, this four-part mini-series will chart the latter years of Catherine’s 34-year reign, as she builds Russia’s reputation as one of the great powers of Europe.

Helen Mirren as Catherine the Great, the Russian Empress who was strong-minded, independent, brilliantly intelligent and sexually liberated — the definition of the modern woman.

Richard Roxburgh as Grigory Orlov, one of Catherine’s former lovers, who helped orchestrate the coup that brought Catherine to power.

Kevin R. McNally as Alexei Orlov, who, with his brother Grigory, helped orchestrate the coup that brought Catherine to power.

What do you think? Are you interested in the story of Catherine the Great? Will you watch the HBO series?

yes. I’ll give it a shot…..I love Helen. No matter what role she plays, she sails through with flying colors.