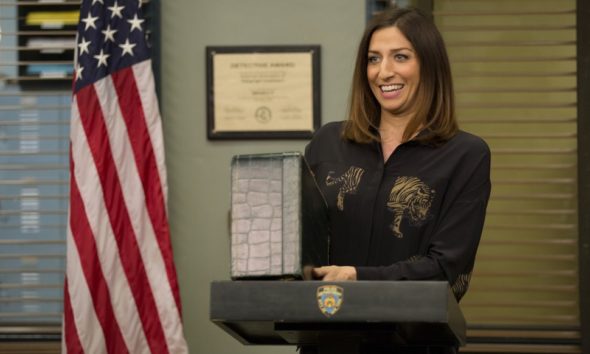 On Twitter, Peretti announced her exit from Brooklyn Nine-Nine but promised Gina won’t be gone forever. The series’ sixth season is expected to debut on NBC in early 2019.

B99 fans. Hiiiiiiiiiiii. Chelsea Peretti, here. I won't be doing a full season of Brooklyn Nine Nine in Season 6. But that doesn’t mean I won’t ever be back, winky face emoji, heart emoji. I want to thank you for the hours you spent watching Gina be Gina:

What do you think? Do you watch Brooklyn Nine-Nine? Are you sad Chelsea Peretti is leaving?

In all actuality she is my least favorite regular character on the show. I find her character obnoxious and don’t think she really adds anything to the B 99.

Never really cared for her character on the show. She wont be missed in my eyes. I found her to be the weakest character and I was never drawn to her I felt more put off. If she never ever returns it will make the show that much better.