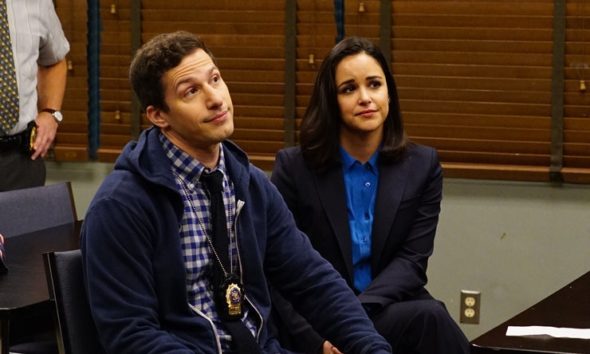 Ratings for Brooklyn Nine-Nine have really waned in recent years, so it’s no surprise FOX has pulled the trigger. So far, season five is averaging a 0.73 rating in the 18-49 demo and 1.757 million viewers.

The defacto series finale will air on Sunday, May 20th, and will feature a wedding. While it was not intended as the show’s last episode, co-creator Dan Goor believes that fans will feel satisfied with the conclusion.

What do you think? Do you watch Brooklyn Nine-Nine? Are you sad it’s been cancelled? Would you have watched a sixth season or, was this a good time to end the show?

5/11/18 update: NBC has picked up the series for season six. Details here.

I cant believe they are cancelling such an amazing show, I really hope some other network picks it up because this show touched on important topics in such an amazing way.

I am so sad. It was my favorite show. It did lag a bit from time to time but it always made me laugh and the cast was amazing. I think I am done with fox. They cancelled “The Good Guys” a few years back and I loved that too. I imagine they will replace it with another reality show or something else by Seth McFarland (which I normally love but “The Orville” is lacking… at least Brooklyn Nine-Nine makes me laugh

Series should have been cancelled years ago, unfunny garbage by crap “comedians”.

I maxed out on Andy after two seasons. One-note comedian.

B9-9 is the best sitcom in the world. Only for a money question, they cancel it.

Quick, send them the money.