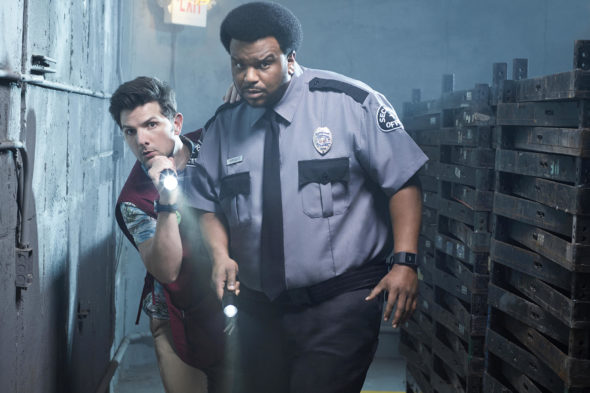 FOX has decided to release some of the remaining episodes of their Ghosted comedy series. Though one would assume that the live-action series has been cancelled, a FOX representative maintains that the series has a ghost of a chance at being renewed for a second season.

Ghosted stars Craig Robinson, Adam Scott, Ally Walker, Adeel Akhtar, and Amber Stevens West. Captain Ava Lafrey (Walker) orders the abduction of ex-LAPD detective and current mall security guard, Leroy Wright (Robinson), and former Stanford astrophysics professor and current bookstore clerk, Max Jennifer (Scott). She then recruits them to work for a secret governmental agency known as the Bureau Underground. Along with weapons and tech expert, Annie Carver (West), and unidentifiable evidence expert, Dr. Barry Shaw (Akhtar), it’s up to Barry and Leroy to save the world from all kinds of unusual threats including cryptids, extraterrestrials, and the paranormal.

The network pulled Ghosted off the air back in January after only nine of the show’s 16 episodes had aired. To date, the first season of Ghosted has averaged a 1.17 rating in the 18-49 demographic and 2.92 million viewers. Those numbers don’t seem so bad (in the current network television landscape) but, if you look at the week-to-week numbers, you’ll see a lot of fluctuations. The episodes that drew positive ratings benefited significantly from high-rated NFL games airing earlier in the evening. The comedy didn’t do so well on non-football nights.

In any case, despite the six-month hiatus, FOX maintains that Ghosted has not been cancelled — or renewed for a second season yet. It seems highly unlikely to be renewed but, these days, you never know. If it is renewed, season two wouldn’t likely air until midseason at the earliest.

In the short term, Ghosted is returning to the FOX schedule on Sunday, June 10th. The network will be airing a pair of episodes at 8:30 pm and 9:30 pm. Other installments will air at 9:30 pm on June 17th and June 24th. The network hasn’t set their July schedule yet but one would assume that the three remaining installments will be broadcast on July 1st, July 8th, and July 15th (finale).

Here are descriptions of the two June 10th episodes:

When new cases become few and far between at the Bureau, Max obsesses over his multiverse theory and Leroy grows restless – until they discover a suspicious wire in the office that they think might be a secret surveillance system. They enlist the whole team to help uncover its source. Meanwhile, a customer (guest star Sam Richardson) arrives at the Bureau’s facade looking to purchase wire coat hangers and everyone must take turns distracting him from the chaos below in the all-new “The Wire” episode of GHOSTED airing Sunday, June 10 (8:30-9:00 PM ET/PT) on FOX. (GHO-111) (TV-PG L, V)

Everyone, including Captain LaFrey, is surprised and alarmed when The Bureau Underground is assigned a new captain, Merv Minette (guest star Kevin Dunn). Minette doesn’t seem thrilled with his new post either, and halts Max and Leroy’s investigation of the suspicious wire in the all-new “The Demotion” episode of GHOSTED airing Sunday, June 10 (9:30-10:00 PM ET/PT) on FOX. (GHO-112) (TV-PG L, V)

What do you think? Do you like the Ghosted TV show? Do you think it has a chance of being renewed for a second season?

I meant Ghosted in my first comment not Ghosts.

I like the show Ghosts a lot , the cast is great! And I really hope it does not get cancelled. It seems like all the shows I like get cancelled.

i’d like to see what they have for season 2, if the channel will give it a chance. i like the surreal and this kind of awkward humor.

I love ghosted. I don’t know what’s wrong with some people I find it very refreshing and the right kind of funny. I hope it gets renewed.

A truly terrible comedy for my liking.

Gave up after 2 episodes.

I’m excited to hear it may be back! Love the show!

Fox gets rid of Lucifer and keeps this garbage. Go Figure……

I doubt they’re keeping it. You don’t pull a show from the schedule halfway through its season and bring it back 6 months later with the idea you will renew it. This is almost surely a burn-off regardless what Fox is hinting.

This is a 30 minute show whereas Lucifer is 60. They retained Lethal Weapon without the title character instead of Lucifer with its cast intact. Fox always manage to demonstrate why their ratings are worse than the other three major networks. At least they’ll beat The CW most of the time.

Awesome. I really love the show. It has the right amount of cheesy goodness, imo.

Seriously??!!! How can FOX bring back “Ghosted”?! That show is terrible and not funny!! I’m DEFINITELY boycotting FOX shows after “The Simpsons” and “Family Guy”!