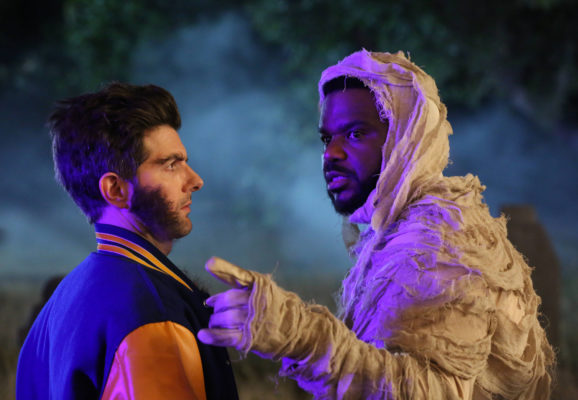 Where cancellation and renewal chances are concerned, there are signs that the Ghosted TV show could be renewed for season two on FOX. The network has ordered an additional six episodes, bringing the first season episode count up to 16. On top of that, executive producer Kevin Etten is exiting the supernatural sitcom. Paul Lieberstein, a veteran of NBC‘s The Office has been named a new EP and will take the reins as showrunner for the final six episodes of the freshman installment.

Airing on the FOX television network, Ghosted stars Lieberstein’s fellow Office alum Craig Robinson, with Adam Scott, Ally Walker, Adeel Akhtar, and Amber Stevens West. The comedy centers on ex-LAPD detective and current mall security guard, Leroy Wright (Robinson), and former Stanford astrophysics professor and current bookstore clerk, Max Jennifer (Scott). The duo are recruited to work for a secret governmental agency known as the Bureau Underground. Now, they are out to save the world from all threats like cryptids, extraterrestrials, and the paranormal.

Ghosted: A Look at the Ratings

The first season of Ghosted is averaging a 1.13 rating in the 18-49 demographic and 2.83 million viewers. Out of the 13 scripted FOX TV shows we’re currently tracking, Ghosted ranks seventh and eighth, respectively.

Ghosted, starring Craig Robinson and Adam Scott and created by Tom Gormican, was a hot package last development season. The project sailed through pilot season as the frontrunner on the comedy side and landed on the fall schedule with a Sunday slot. It was given a 10-episode order because of Fox’s fall needs, dictated by frequent preemptions. Ghosted has been a modest ratings performer though, according to Fox, it has improves its year-ago time period by +6%.

I hear the network had been looking for a tonal shift on the show, seeking to ground it as more of a workplace comedy, resulting in the hire of a new showrunner with extensive workplace comedy experience to land a back order. In addition to his lengthy stint on The Office, which he joined right after the pilot, Lieberstein also served as executive producer on HBO’s The Newsroom.

What do you think? Have you been watching the first season of the Ghosted TV series? Did it deserve the additional episodes. Should Ghosted be cancelled or renewed for season two on FOX? Let us know, below.

I just discovered the show and really like it. I’m glad they’re going to put some additional episodes on season 1 and I hope they do a season 2

We need a fun light hearted comedy to make us laugh lately. Ghosted does it for me!! Stop canceling cute comedies!!!! We pay big bucks to watch TV so let me watch what I enjoy.

Have been enjoying the fun of this show…. Hoping for Season 2.

I was a fan of The Office and so far Ghosted is pretty good. However, the stretch of The Office when Lieberstein (aka Toby Flenderson) was show runner, was not it’s best. It was after Steve Carrell left and the episodes just weren’t as funny.