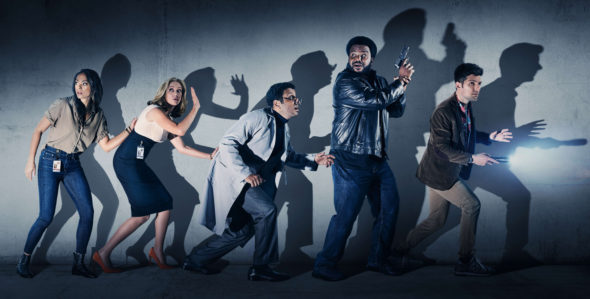 TV show description:
A single-camera, live-action comedy, the Ghosted TV show centers on the partnership between two polar opposites. Leroy Wright (Robinson) is working as a mall security guard and Max Jennifer (Scott) is a bookstore clerk, when they are rendered unconscious and taken by van to a lair of sorts.

Deep inside the headquarters of a secret agency known as the Bureau Underground, we learn Max has his PhD in physics. This MIT grad taught at Stanford and even published a book, The Multiverse Equation, but lost his job when he started talking about aliens abductions. Meanwhile, Leroy used to be the top missing persons detective on the LAPD until he went after a perp without backup, which ended in his partner’s death.

Captain Ava Lafrey (Walker) explains to her captive audience that the Bureau Underground specializes in investigations involving extraterrestrials, cryptids, and the paranormal. She asks for their help in locating Agent Checker (Hand) who went missing while on assignment. All she has is footage of him, pleading for someone to contact Max and Leroy, so that they can save him.

Neither the skeptical Leroy nor the genius and true believer, Max, know Agent Checker. Max, however, has suffered heavy personal losses over the years. Captain Lafrey implies she can have him reinstated at Stanford, and promises Leroy she can get him back on the LAPD.

Before sending her new recruits on assignment, Lefrey introduces Leroy and Max to Annie Carver (West), the Bureau’s weapons and tech expert, as well as Dr. Barry Shaw (Akhtar), who specializes in unidentifiable evidence.

The search first leads Leroy and Max to Checker’s storage unit and then to the Waterbridge Nuclear Plant, where everything goes awry. While they locate an incapacitated Checker, they are unable to retrieve him and complete the mission, thanks to the fearsome creature guarding him. The latter is eventually revealed to be a regular guy, imbued with and controlled by some potent alien life force. Meanwhile, aliens have spirited Checker away in their spaceship.

Back at the Bureau Underground, Lafrey thanks them for their service and says she can get Leroy back on the police force, but has had no luck with Stanford, where Max is concerned. Leroy and Max aren’t going anywhere. They’re determined to find Checker and figure out what’s going on. After Lefrey, Annie, and Barry welcome them to the Bureau Underground, Max spots his missing wife, thanks to a camera recording other abductees the Bureau is monitoring.

Will they be able to find Checker? What happened to Max’s wife? Can these ragtag heroes of the Underground save humanity? Stay tuned.

Series Finale:
Episode #16 — Hello Boys
While trying to prove their worth to Captain Lafrey and the rest of The Bureau Underground, Leroy and Max finally have a lead on the whereabouts of Agent Checker (guest star Linc Hand). Leroy finds himself in the odd position of being the believer when Max loses faith in their competency.
First aired: July 22, 2018.

What do you think? Do you like the Ghosted TV series? Should this TV show have been cancelled or renewed for a second season on FOX?

Please bring back Ghosted? It’s great fun! I loved it!