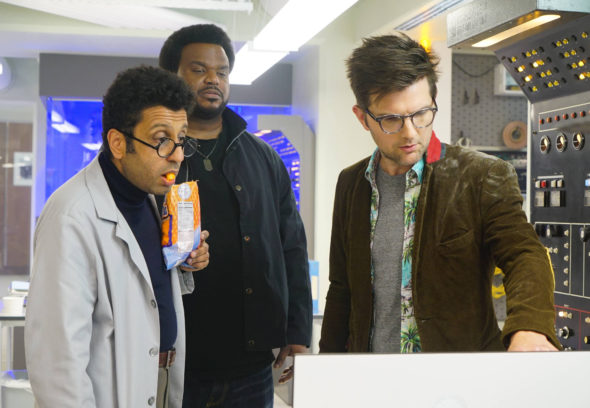 How safe does the Bureau Underground keep the earth during the first season of the Ghosted TV show on FOX? As we all know, the Nielsen ratings typically play a big role in determining whether a TV show like Ghosted is cancelled or renewed for season two. Unfortunately, most of us do not live in Nielsen households. Because many viewers feel frustration when their viewing habits and opinions aren’t considered, we’d like to offer you the chance to rate all the Ghosted season one episodes. **Status update below.

A FOX sitcom, Ghosted stars Craig Robinson, Adam Scott, Ally Walker, Adeel Akhtar, and Amber Stevens West. Captain Ava Lafrey (Walker) orders the abduction of ex-LAPD detective and current mall security guard, Leroy Wright (Robinson), and former Stanford astrophysics professor and current bookstore clerk, Max Jennifer (Scott). She then recruits them to work for the a secret governmental agency known as the Bureau Underground. Along with weapons and tech expert, Annie Carver (West), and unidentifiable evidence expert, Dr. Barry Shaw (Akhtar), it is up to Barry and Leroy to save the world from all kinds of unusual threats including cryptids, extraterrestrials, and the paranormal.

What do you think? Which season one episodes of the Ghosted TV series do you rate as wonderful, terrible, or somewhere between? Should FOX have cancelled or renewed Ghosted for a second season? Don’t forget to vote, and share your thoughts, below.

Love it!!! Definitely needed more exposure so very sad it got canceled through no fault of its own. Funny, holds the interest and the acting is awesome!! Very well made!!! Hopefully whoever will reconsider and keep the show going!!

Please keep Ghosted on the air. I really like it!!!!!

I love this show so much!!! I hope it gets renewed for a season 2!! It deserves it!! I hope it doesn’t get cancelled, because it just started. It’s such an amazing show!!

I love the show, please bring it back for automakers seasons. If it were given a more favorable time slot it would take off like wildfire, as so many way worse shows do in better time slots. Craig Robinson is a riot and his partner in supernatural crime Adam Scott does a great job at the goofy, nerd – accidental hero role. This show is light, funny, and not to be taken serious, and gives a good laugh throughout. It’s the best show in a long time, and my wife and I are anxiously awaiting more episodes. Leeroy and Max… Read more »

Please renew ! It’s fresh, funny, awesome cast , awesome guest stars . You have to let people know shows like this are on !!!! Do better advertising of your programming. There’s so much garbage on TV, people are watching Netflix and Hulu instead. How about being the lead in giving viewers the opportunity to know what’s on . Creative advertising . Anyways I love the show.

I really hope Ghosted gets picked up for a second season

cute show, characters are great in their roles. Don’t take it serious just sit back and laugh. we needed a good show to laugh at, everybody is too serious

Excellent Show if not taken seriously. Just sit back, laugh and enjoy !

Ghosted is the BEST and FUNNIEST show I’ve watched in absolutely ages! I sincerely hope that the powers that be make the right decision and order a 2nd series (also a 3rd, 4th, 5th, etc!). This show is the highlight of my week and the extremely well written scripts provide much needed comedic relief. In a world filled with gloom Ghosted is a beacon of light, guiding weary travellers to 30 minutes of pure, entertainment!