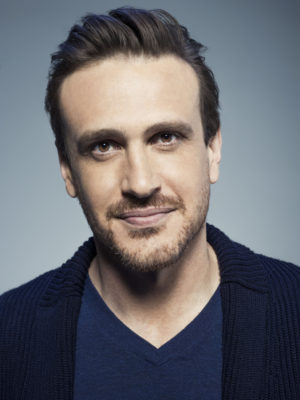 Jason Segal is returning to series television. AMC has announced that the cable channel has ordered a new mystery anthology TV show called Dispatches from Elsewhere. Segal has created the series, will star in it, and will also executive produce, alongside Scott Rudin, Eli Bush and Garrett Basch. Filming of Dispatches from Elsewhere is expected to begin early next year and it seems likely to air sometime in late 2019.

“Dispatches From Elsewhere” is about a group of ordinary people who stumble onto a puzzle hiding just behind the veil of everyday life. They will come to find that the mystery winds far deeper than they ever imagined.

“AMC has a proven history of finding shows that rise above, in every sense, and we think ‘Dispatches from Elsewhere’ will be an incredible addition to that club,” said David Madden, president of original programming for AMC, SundanceTV, and AMC Studios. “This is a very special project based on a truly unique premise and peopled by vivid characters, all driven by Jason’s wildly creative vision. We’re thrilled for audiences to see this bold, witty and enthralling series.”

Said Segel, “I am thrilled to be telling this story at AMC. I truly could not imagine a better team and a more perfect home for this material.”

AMC Studios opened a writers’ room earlier this year for “Dispatches From Elsewhere” under their scripts-to-series development model. AMC has successfully utilized this model for new series such as “Dietland,” “Lodge 49” and the upcoming “NOS4A2.”

“Dispatches From Elsewhere,” which shoots early next year, is an AMC Studios production.

About AMC
AMC is home to some of the most popular and acclaimed programs on television. AMC was the first basic cable network to ever win the Emmy® Award for Outstanding Drama Series with “Mad Men” in 2008, which then went on to win the coveted award four years in a row, before “Breaking Bad” won it in 2013 and 2014. The network’s series “The Walking Dead” is the highest-rated series in cable history and the number one drama on television among adults 18-49 for the last six seasons. AMC’s other current original drama series include “Better Call Saul,” “Fear the Walking Dead,” “Dietland,” “The Terror,” “Into the Badlands,” “Humans,” “Preacher,” “The Son,” “McMafia” and the forthcoming “Lodge 49,” “The Little Drummer Girl” and “NOS4A2.” AMC also explores authentic worlds and discussion with original shows like “Talking Dead,” “Talking with Chris Hardwick,” “AMC Visionaries” and “Ride with Norman Reedus.” AMC is owned and operated by AMC Networks Inc. and its sister networks include IFC, SundanceTV, BBC America and WE tv. AMC is available across all platforms, including on-air, online, on demand and mobile.

What do you think? Do you plan to check out the Dispatches from Elsewhere TV show on AMC? Do you enjoy Segal’s work?

Yes, I look forward to watching this show. Sounds intriguing.