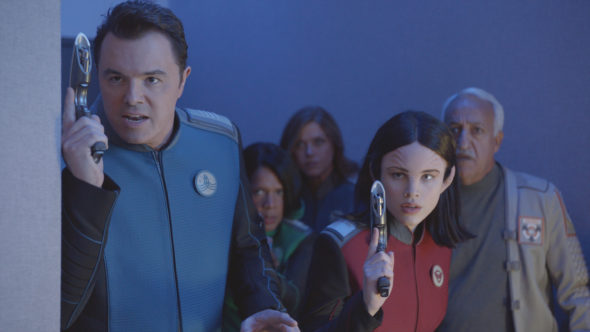 Is there still enough space in outer space for both Ed and Kelly? Has The Orville TV show been cancelled or renewed for a second season on FOX? The television vulture is watching for the latest cancellation and renewal news, so this page is the place to track the status of The Orville, season two. Bookmark it, or subscribe for the latest updates. Remember, the television vulture is watching your shows. Are you?

Airing on the FOX television network, The Orville stars Seth MacFarlane, Adrianne Palicki, Penny Johnson Jerald, Scott Grimes, Peter Macon, Halston Sage, J Lee, Mark Jackson, Chad L. Coleman, Norm Macdonald, Larry Joe Campbell, Victor Garber, Brian George, and Rachael MacFarlane. In 2417, Ed Mercer (Seth MacFarlane) is promoted to captain The U.S.S. Orville, with the assistance of First Officer Kelly Grayson (Palicki). Unfortunately, she’s his ex-wife, and her presence acts as a bridle on his enthusiasm. Whether facing off with the Krill, a dangerous alien race, or attempting rescues on behalf of the Planetary Union, the human and alien crew still must deal with their mundane issues and each other.

The first season of The Orville averaged a 1.24 rating in the 18-49 demographic and 4.33 million viewers. Find out how The Orville stacks up against the other FOX TV shows.

Although it premiered with very good numbers, the first two episodes were scheduled to air after NFL double-headers on Sunday evenings, which is a great lead-in. The show regularly airs on Thursdays when it’s tougher to attract an audience. While the numbers saw a big drop in the new timeslot, they are still good enough to earn a second season on FOX. I’ll keep an eye on the Nielsens and update this page with any breaking developments. Subscribe for free alerts on any cancellation or renewal news regarding The Orville.
11/2/17 update: The Orville is renewed for season two on FOX. Details here.


What do you think? Are you glad that The Orville TV show was renewed for a second season? How would you feel if FOX had cancelled this TV series, instead?

Liked show first few episodes. However. Everyones weird obsession in the 25 and a half century with 20th century music and movies, and the bizzare elephant trunked officers 1980s
“narly dude” lingo is just too cringe worthy to endure.

The Orville has the right mix of drama and comedy. Few shows do this.

Absolutely loved the first season. Seth MacFarlanes blend of Comedy and Science Fiction works perfect for this series. Although this show is not to be taken seriously, there were episodes that actually were making a point in today’s society. “About a Girl” (moral implications & judging other cultures), “Krill” (religion/war/teaching), “Majority Rules” (technology abuse), and of course the captain and his first offices sexual tension… hilarious to see where they go with that! Excellent chemistry, set design and storytelling! Keep up the great work!!!