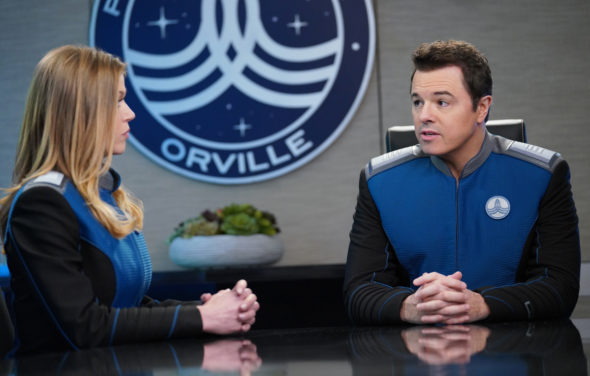 Is the Orville still flying high? Has The Orville TV show been cancelled or renewed for a third season on FOX? The television vulture is watching for the latest cancellation and renewal news, so this page is the place to track the status of The Orville, season three. Bookmark it, or subscribe for the latest updates. Remember, the television vulture is watching your shows. Are you?

Airing on the FOX television network, The Orville stars Seth MacFarlane, Adrianne Palicki, Penny Johnson Jerald, Scott Grimes, Peter Macon, Halston Sage, J Lee, and Mark Jackson. The sci-fi action-adventure series centers on Captain Ed Mercer (Seth MacFarlane), of The U.S.S. Orville, and First Officer Kelly Grayson (Palicki) — his ex-wife. Whether facing off with the Krill, a dangerous alien race, or attempting rescues on behalf of the Planetary Union, the human and alien crew still must deal with their mundane issues and each other.

The second season of The Orville averaged a 0.75 rating in the 18-49 demographic and 3.16 million viewers. Compared to season one, that is down by 40% and 27%, respectively. Find out how The Orville stacks up against the other FOX TV shows.

Will The Orville be cancelled or renewed for season three? Right now, it is too soon to judge by the ratings, but I am sure FOX will pick up another installment, because it has been approved to receive California tax incentives for a third season. Remember, entertainment aside, television is a numbers game, and the most important numbers involve money. Still, I’ll keep an eye on the Nielsens and update this page with any breaking developments. Subscribe for free alerts on any cancellation or renewal news regarding The Orville.

5/11/19 update: FOX has renewed The Orville TV show for a third season.


What do you think? Are you glad that The Orville TV show has been renewed for a third season? How would you feel if FOX had cancelled this TV series, instead?

Should not have moved it to HULU! Not everyone has good internet that they can stream stuff. Should have left it on Fox so us country folks could continue watching. VERY disappointed!

Love the show and want more

The ratings line really plunged with episode 2 of season 2. This was the episode called “Primal Urges”. Many conservatives can overlook a little SJW content. But when you slap them right up-side the head with content like what was in that episode, it’s simply too much. I’m pretty certain that’s why the ratings plunged at that particular episode, and never recovered. I didn’t like S02E02, but it didn’t keep me from giving it another chance. A few years ago, I would’ve stopped watching altogether after that episode. But these days, I try to concentrate on the positive instead of… Read more »

I’m very happy the Orville is coming back. Don’t make the mistake NBC did years ago when they cancelled Star Trek as I believe we are looking at the birth of another legend. I’m 67 years old, and love the Orville.

Wow, FOX has now put in WWE, bumping Last Man Standing back to the spring of 2020, they have allowed the wonderful Orville to be snatched by HULU, but brought back The Resident on time and at the usual schedule. Perhaps there is a bit of a mental issue in the hierarchy of FOX? HULU is already my go-to app to watch pretty much everything, (just a little advertising if tvseriesfinale will allow me here – there was a time I watched a lot of Netflix. As it got worse and worse with shows aimed at liberal voters and 12… Read more »

No liberal values in the Orville at all…noo…none at all. Gay aliens, interspecies relationships, arguments over the merits of gender assignments…lol.

I just enjoy watching the TV show.
How that it is going to Hulu . I won’t be able to watch it we do not have Hulu . Sad
Bring it back to FOX TV

They wouldn’t lose audience if they’d stop being so politically correct and preachy every episode. Man that gets old.

While I understand and even slightly agree with you, I can overlook the occasional preachiness which actually got less as it went on. It is a show that doesn’t take itself seriously, that makes me laugh and has aspects of Star Trek done respectfully enough that I can overlook their lapses into liberal nonsense. However, just as a reminder, Mr. McFarland, many people do not hold the same liberal attitude you do and it would be to your success to stop inserting Hollywood liberal garbage and keep it a show with which everyone has fun and enjoys!

Honestly…why watch it then? Do you only want to watch things that don’t challenge your view of the world at all? Just live in your own filter bubble hearing only things that align with your world view 24/7?