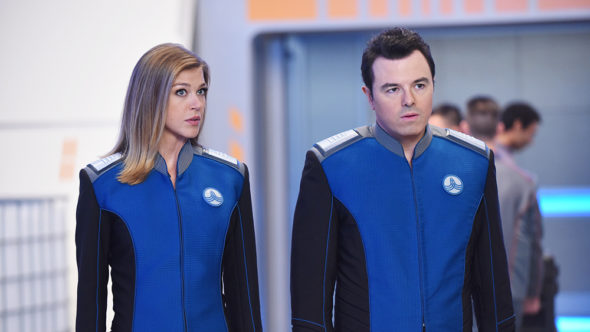 After a long absence, The Orville was set to return with its third season in March, but that return date has been delayed. Season three will now launch on Hulu on June 2nd. Series star and creator Seth McFarlane announced the premiere delay via social media.

Hulu teased the return in a press release.

“Seth MacFarlane’s epic space adventure series The Orville returns exclusively as a Hulu original series. Set 400 years in the future, The Orville: New Horizons finds the crew of the U.S.S. Orville continuing their mission of exploration, as they navigate both the mysteries of the universe and the complexities of their own interpersonal relationships.

Check out a sneak peek for The Orville season three below.

What do you think? Are you sad about the delay of The Orville? Are you looking forward to this show’s return?

DH: It went to HULU because the other networks would not renew it.
EE: Probably not the last season, as showrunner Seth MacFarlane is driving the ship!

I read somewhere that season 3 would be the last for Seth MacFarlane.

I love the Orville but refuse to watch it on Hulu or any other extraneous TV station. I’m truly sorry I’m going to miss the show but they should have left it on network cable.

It was never in cable. It was on Fox and fox didn’t want to renew the show.

Don’t worry it’ll be here June 2nd. It’s a great show. If you don’t like someone, focus on people you do like. You’ll be happier I’m sure.

It may be a parody, but it’s the best Star Trek series since TNG. Hope the delay is worth it, Seth!

Let’s hope this doesn’t go the same way other shows that the networks badly screwed with and delayed over and over. Probably last season.

I am sad that we have to wait longer but if the next season is anything like the sneak peak then I will not waste my time watching it. I am not interested in another sci fy story with long shoot them up chase scenes with scary monsters. I enjoyed the human and alien banter in the previous episodes.