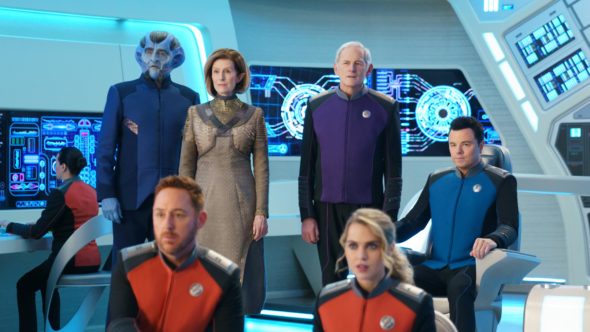 The crew may be on their final mission. Has The Orville TV show been cancelled or renewed for a fourth season on Hulu? The television vulture is watching all the latest cancellation and renewal news, so this page is the place to track the status of The Orville, season four. Bookmark it, or subscribe for the latest updates. Remember, the television vulture is watching your shows. Are you?

Unless they decide to publicize viewership, it is typically difficult to predict whether Hulu will cancel or renew a show like The Orville for season four. Thanks to switching from a broadcast network to a streaming service and the global pandemic, it’s been more than three years between seasons. Word is that a fourth season is highly unlikely to happen, at least for now. I’ll keep my ears open and an eye out for news, and will update this page with breaking developments. Subscribe for free alerts on The Orville cancellation or renewal news.

What do you think? Do you hope The Orville TV show will be renewed for a fourth season? How would you feel if Hulu cancelled this TV series, instead?

Enjoy the New Horizons Orville and really hope there is a season 4. Always look forward to seeing the new episodes.

If Hulu cancels The Orville then I cancel Hulu

It has nothing to do with HULU! Seth McFarlane has already expressed in the past that season 3 was supposed to be his last season, unfortunately. I hope he will change his mind. It’s hard to find such good sci-fi shows — and that’s coming from a Star Trek fan and member of Starfleet International (SFI.org)!

This is the only series I binge watch constantly, I wait on pins and needles for the next episode which yes made the pandemic 1000% way worse for me! Please don’t cancel this, it is leaps and bounds better than anything out now past or present!

I want 7 seasons and a couple movies

I hope the show continues and does not get cancelled. I just started watching this past June and I’ve already seen every episode at least once. I had no idea this show would captivate my interests as it did. I was never big on star trek or anything. I think it’s amazing how societal issues as well as human rights are portrayed in the show. The Moclans and gender identity as well as suicide, a character I’ve loved and hated and loved all over again. This show had me rooting for the success of a human and robot romantic relationship.

Yes, I love The Orville and hope it gets renewed for a 4th, 5th 6th etc..season

I’ll probably cancel my Hulu sub if The Orville gets cancelled. IMO it was the only show on Hulu that can contend with the heavy hitting exclusives on the other streaming services. Constantly blows my mind that they seem to have set out to make a parody TNG on a lark then actually go on to make a mostly serious better version of TNG

The Orville has become one of my favorite shows to watch.

This kind of brings my piss to a boil. All kinds of shows that are much less successful go on for years and years yet good shows like Orville, Firefly, get shafted. It’s not fair I tell you! ✊

I’ll comment even though it will not make a difference either way but I would be one of those disappointed fans if it was cancelled.

Cancele the Orville? I thought the main reason Orville was moved to keep it from being canceled! If that’s the case, it was better off on broadcast TV and not a subscription service. Orville is a great show and needs, at least, 10 more seasons.

aT the time yes, this was before pandemic, Seth joining universal. Pandemic etc. It was only moved to hulu cause Seth couldn’t get it finished by Spring 3yrs ago, and Fox had just got sold to Disney so Disney being full owners if hulu figured, might as well have it in fall the following year then the pandemic happened, they took 3 yrs to make 10 episodes. The show is expensive, all the actors contracts are up, Seth has moved on. Hulu is trying to reposition itself as a HBO like subscription service burning thru made for FX shows, I… Read more »