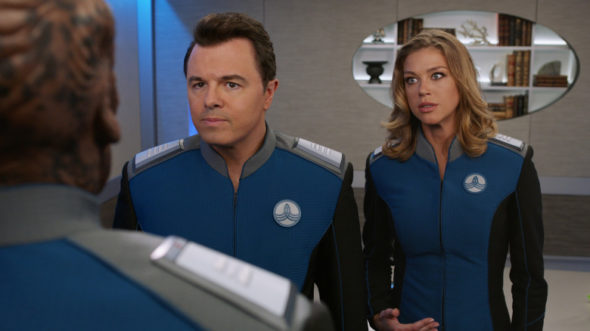 Despite delays, The Orville is still coming to Hulu for its third season, and series creator Seth McFarlane has given fans of the sci-fi comedy-drama series an update.

Season two finished airing on FOX in April 2019 and it was announced in July 2019 that the series would be moving to Hulu for its third season. Due to the show’s ambitious production elements, it was determined that season three wouldn’t be ready for FOX’s 2019-20 season when the network needed it. As a result, the decision was made to move it to Hulu, where the first two seasons were already available.

Season three was expected to be released on Hulu in late 2020 but, that won’t happen due to production having been shut down by the pandemic in March.

In an interview with McFarlane, co-star Jessica Szhor shared, “We were pushing through, middle of the season, scripts were banging out, gas pedal down, and then it was like, ‘Halt!'”

He noted, “There has been a lot of speculation online. ‘Will the show come back?’ The show is still a huge priority for me and for the cast and for everyone else. We do have a season to finish, and we are going to finish it. Right now it’s really just about the logistics of how we do it in this climate while keeping everyone safe. For a show with a lot of prosthetic makeup that requires close contact, a lot of background artists, a lot of… it’s a big job. And so, you want to make sure you do it in a way that keeps everyone safe and secure. And, once we have those protocols worked out, we will start up again and you will get more Orville.”

McFarlane confirmed that most of the scripts for season three have already been written.

Here’s the full conversation between McFarlane and Szohr:

What do you think? Are you a fan of The Orville? Will you watch season three on Hulu?

I loved the first seasons of “The Orville” and I never missed a single one, but I had to stop watching when the series moved to a “pay for” network. My Husband I am are on a limited income, we are Senior’s, so our income is very limited, so paying for a Hulu Subscription is out of our budget. Plus, with so many people jobless due to the Covid 19 pandamic, and trying to survive on basically nothing, it suprises me that the “pay for” networks could even stay afloat. I would think a move to the orginal network (or… Read more »

I have been chomping at the bit for season 3.

Where can we watch reruns of Season 2?

Absolutely love it, glad it was picked up by hulu.

I really enjoyed the first season, but the second season was even better. Looking forward to a continuing run.

The second season was better for me than the first (although the first was really good
entertainment.) Looking forward to the next season.

Not even funny hate him. Others guys Seth Rogen, Will Farrell not same anymore including Jim Carrey too. Adam lamberg way awful comedian need to end Family guy and South Park stupid.

It’s no wonder the show is ending. I watched every episode while it was on Fox and really liked it. When it went to Hulu, I refused to pay for another premium channel just to watch one show.