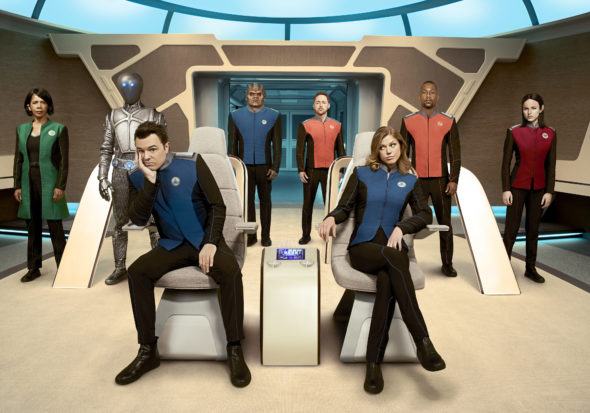 TV show description:
From creator and star, Seth MacFarlane, The Orville TV show is a live-action space adventure, set 400 years in the future. The story centers on the crew of a mid-level exploratory spaceship, The U.S.S. Orville.

In 2417, Ed Mercer (MacFarlane) is promoted to captain the Orville, with the assistance of First Officer Kelly Grayson (Palicki). Unfortunately, she’s his ex-wife, and her presence acts as a bridle on his enthusiasm.

Dr. Claire Finn (Jerald); helmsman Gordon Malloy (Grimes); Lt. Commander Bortus (Macon); his mate, Klyden (Coleman); security officer Alara Kitan (Sage); navigator John LaMarr (Lee); and A.I. life-form Isaac (Jackson) round out the crew. Whether facing off with the Krill, a dangerous alien race, or attempting rescues on behalf of the Planetary Union, these humans and aliens still must deal with their mundane issues and each other.

What do you think? Do you like The Orville TV series? Should this TV show be cancelled or renewed for another season on Hulu?

Please renew this show for a 4th season. It continues to improve with age.

I LOVE the Orville. Please do not cancel this show.

Frank Broz
The inter action between the crew continues to uplift quality TV sci-fi.
The humor helps us all enjoy the show. From time to time I find myself with damp eyes brought about by the resolution of conflict. Keep it coming!

I really like The Orville can’t wait for it to return!

The orville is one funny show hope it comes back