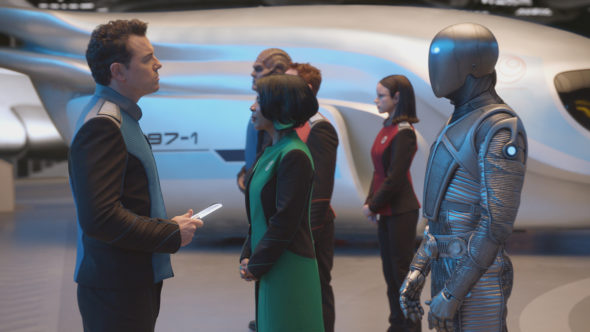 How goes the voyage on The U.S.S. Orville, in season one of The Orville TV show on FOX? As we all know, the Nielsen ratings typically play a big role in determining whether a TV show like The Orville is cancelled or renewed for a second season. Unfortunately, most of us do not live in Nielsen households. Because many viewers feel frustrated that their viewing habits and opinions aren’t considered, we’d like to offer you the chance to rate all season one episodes of The Orville for us here.

A FOX space adventure, The Orville stars Seth MacFarlane, Adrianne Palicki, Penny Johnson Jerald, Scott Grimes, Peter Macon, Halston Sage, J Lee, Mark Jackson, Chad L. Coleman, Norm Macdonald, Larry Joe Campbell, Victor Garber, Brian George, and Rachael MacFarlane. In 2417, Ed Mercer (Seth MacFarlane) is promoted to captain The U.S.S. Orville, with the assistance of First Officer Kelly Grayson (Palicki). Unfortunately, she’s his ex-wife, and her presence acts as a bridle on his enthusiasm. Whether facing off with the Krill, a dangerous alien race, or attempting rescues on behalf of the Planetary Union, the human and alien crew still must deal with their mundane issues and each other.

What do you think? Which season one episodes of The Orville TV series do you rate as wonderful, terrible, or somewhere between? Should FOX cancel or renew The Orville  for a second season? Don’t forget to vote, and share your thoughts, below.

Seth McFarland fan, was not sure where this was heading at first, however, witty, thought provoking, good writing make it one of my favorites.

I am nearing the last 3 episodes. It is going to be a bit depressing waiting for the new season, but thank goodness there is a 2nd Season. One of those things in life one can be grateful for.

This is my husband’s & my favorite show. It is the best scifi. I love how funny it is. The writing is excellent. The cast is wonderful. The topics are relevant. I love the Star Trek meets Galaxy Quest feel about it. We can’t wait for it to start agin with season 2.

I liked this show it’s new and creative and plus how many star treks are there 8? Like that’s not very fair so please renew this show for a second season

My husband and I can’t wait to watch The Orville each week. Incredibly clever, humorous and yet deep. Love Seth’s quick wit. We rank the show at the top of our viewing list. Screw the critics. We want more of The Orville. We are as addicted to the show, The Orville, as we are The Big Bang Theory.

I’ve enjoyed “The ORVILLE” since catching the first episode by accident. I was initially put off temporarily by the attempt to make it a comedy, but the shows writers made it turn into a great sci fy “good guys vs. bad guy” TV show. I am delighted that FOX will renew it for season TWO and give it the chance to hopefully find its audience.

falling in love with the fantastic show

The show is developing nicely – I’m hoping for a long run and maybe even a string of movies down the road – it definitely had ST-Discovery beat hands down!

I love this show!!!…Excellent computer imagery and hilarious…

I LOVE this show!!…Great computer imagery and it’s hilarious…The comedy is spread out through the show and hits you unexpectedly…