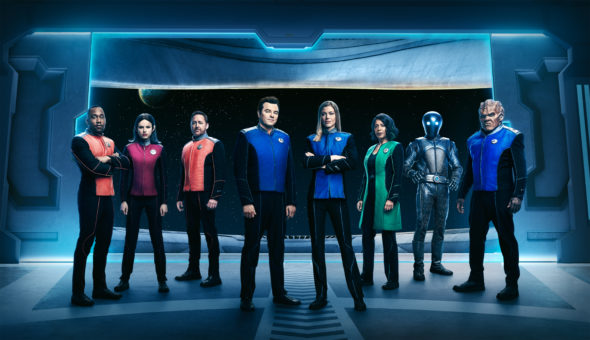 Is the crew at the top of their game in the second season of The Orville TV show on FOX? As we all know, the Nielsen ratings typically play a big role in determining whether a TV show like The Orville is cancelled or renewed for season three. Unfortunately, most of us do not live in Nielsen households. Because many viewers feel frustrated that their viewing habits and opinions aren’t considered, we’d like to offer you the chance to rate all season two episodes of The Orville for us here. *Status update below.

A FOX space adventure, The Orville stars Seth MacFarlane, Adrianne Palicki, Penny Johnson Jerald, Scott Grimes, Peter Macon, Halston Sage, J Lee, and Mark Jackson. The action-adventure series centers on Captain Ed Mercer (Seth MacFarlane), of The U.S.S. Orville, and First Officer Kelly Grayson (Palicki) — his ex-wife. Whether facing off with the Krill, a dangerous alien race, or attempting rescues on behalf of the Planetary Union, the human and alien crew still must deal with their mundane issues and each other.

What do you think? Which season two episodes of The Orville TV series do you rate as wonderful, terrible, or somewhere between? Should FOX cancel or renew The Orville  for a third season? Don’t forget to vote, and share your thoughts, below.

Yes, a 3. Season in 2020! Can’t wait!
Best SiFi-Show for new Space-Odyssee Fans and the “older” Star Trek Fans.
Hope, there are a lot of (funny) Stories to tell/show us in the next years.
4./5./6. Season a.s.o.
All the best to the whole Orville-Crew!
And a great “Thank you” to Seth MacF!
Many Greetings
Rainer from Berlin(Germany)

This is the best TV show to run in YEARS! It gives the orginal “Star Treks” an honest run for the money. I would be devastated to see this Gem canceled!
FOX…listen to the real people out here in viewing land, we can’t all have boxes attached to our TV’s, and the viewers are all saying the same thing, this show is #1!!!

Please, PLEASE find some way to renew our 21st century view of Star Trek-@FOXTV has a chance here to go down in TV history as the network that UNDERSTOOD what it had – and kept show’s LOYAL audience as viewer/consumers…

The Orville is fantastic! I would be VERY disappointed if they didn’t renew this for another season! Identity 1 and 2 was the coolest stuff I ever saw! Can’t wait to see more!!!

This is a great show, it has a lot of humour and action, a lesson or two in each episode and you feel good when the show is over leaving you wanting more shows. Fox please renew the Orville.

This is a great show: witty, adult humor, great actors, tongue-and-cheek sci-fi, underlying life lessons. The writers are definitely A+. The ending of season 2 would be a great time to wrap it up, BUT I hope not. Would definitely watch a 3rd!!! Oh, BTW, Kelly is great eye candy!

Season 3 is definitely on tap…

Definitely want it renewed! Would love to see what Seth has in mind for season 3

Well I love Star Trek Discovery AND the Orville. That’s because I love science fiction and they are BOTH great sci fi shows.
Discovery has fixed its Canon problems in season 2 and will spend season 3 950 years in the future. The Orville has toned down the comedy in season 2 but it was better for it I thought. Really hoping for a season 3.