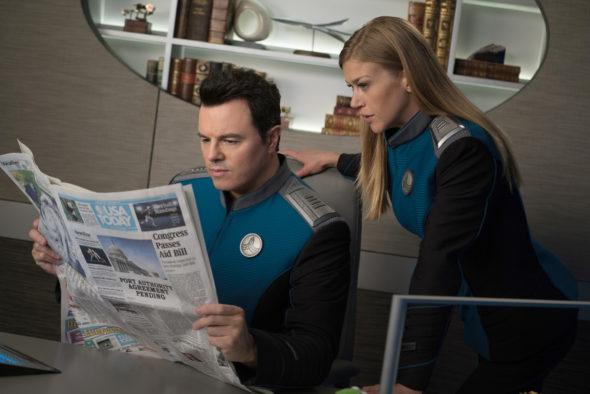 The explorations of the Orville and her diverse crew will continue. FOX has renewed The Orville TV show for a third season as part of their programming for the 2019-20 television season.

The Orville stars Seth MacFarlane, Adrianne Palicki, Penny Johnson Jerald, Scott Grimes, Peter Macon, Halston Sage, J Lee, and Mark Jackson. The sci-fi action-adventure series centers on Captain Ed Mercer (Seth MacFarlane), of The U.S.S. Orville, and First Officer Kelly Grayson (Palicki) — his ex-wife. Whether facing off with the Krill, a dangerous alien race, or attempting rescues on behalf of the Planetary Union, the human and alien crew still must deal with their mundane issues and each other.

What do you think? Are you a fan of The Orville TV show on FOX? Do you plan to watch season three?

Hated when it left fox for hulu

Loved it much more than I thought I would.

YES!!!… Big fan of “The Orville” show. Show has been moved from FOX to Hulu. Will sign up with Hulu once I know Orville season 3 is really available.

I absolutely love “The Orville” show. It’s clever, quirky, funny,with enough drama to put you on the edge of your seat, and the unusual characters make it so much fun to watch.

Yes! I’ve waited with baited breath, for season 2 ended with a cliffhanger. I don’t know what some folk have against this show. It is like the classic Star Trek’s comic episodes. Please keep it coming!

Yes we plan to watch, thought it was going on a pay channel like Picard and star trek.

I understand it was renewed but with a slashed budget. No surprise, Orville is pretty much a geezer show repeating the same joke because the geezers forget. It ratings overall fell about 30% but its ratings among key 18-40 year olds fell about 50% .