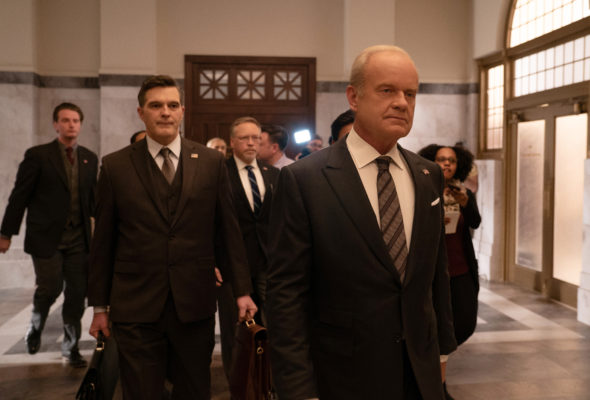 It looks like court is permanently adjourned for this legal drama. FOX has cancelled the Proven Innocent TV show so it won’t be returning for a second season.

Airing on Friday nights, Proven Innocent stars Rachelle Lefevre, Kelsey Grammer, Russell Hornsby, Vincent Kartheiser, Nikki M. James, Riley Smith, and Clare O’Connor. The series centers on Madeline Scott (Lefevre), a resolute lawyer on a lifelong quest for justice. When she was just 18, Madeline was wrongfully convicted of murder, along with her brother, Levi (Smith). Now she and her partner (and former defense attorney), Easy Boudreau (Hornsby), lead an underdog defense team, dedicated to overturning unjust convictions. Meanwhile, Gore Bellows (Grammer), the prosecutor who once put her away, is determined to return her to prison.

The first season of Proven Innocent on FOX averaged a 0.40 rating in the 18-49 demographic and 2.01 million viewers. Compared to the other FOX TV shows of the 2018-19 season, Proven Innocent ranks 16th of 16 scripted series.

What do you think? Do you like the Proven Innocent TV show? Would you have watched season two?

Yup I really enjoy the show as well. It doesn’t like all the really good shows are taking off of television

I really liked this show. Way to go Fox for taking another show we liked.