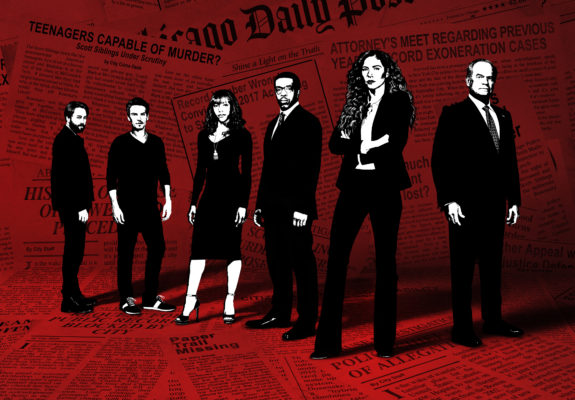 What’s your verdict on the first season of the Proven Innocent TV show on FOX? As we all know, the Nielsen ratings typically play a big role in determining whether a TV show like Proven Innocent is cancelled or renewed for season two. Unfortunately, most of us do not live in Nielsen households. Because many viewers feel frustration when their viewing habits and opinions aren’t considered, we’d like to offer you the chance to rate all of the Proven Innocent season one episodes here. *Status update below.

A FOX legal drama, Proven Innocent stars Rachelle Lefevre, Kelsey Grammer, Russell Hornsby, Vincent Kartheiser, Nikki M. James, Riley Smith, and Clare O’Connor. The series centers on Madeline Scott (Lefevre), a resolute lawyer on a lifelong quest for justice. When she was just 18, Madeline was wrongfully convicted of murder, along with her brother, Levi (Smith). Now she and her partner (and former defense attorney), Easy Boudreau (Hornsby), lead an underdog defense team, dedicated to overturning unjust convictions. Meanwhile, Gore Bellows (Grammer), the prosecutor who once put her away, is determined to return her to prison.

What do you think? Which season one episodes of the Proven Innocent TV series do you rate as wonderful, terrible, or somewhere between? Should FOX cancel or renew Proven Innocent for a second season? Don’t forget to vote, and share your thoughts, below.

*5/11/19 update: FOX has cancelled the Proven Innocent TV show so there won’t be a second season.

Proven Innocent became my no miss show after the 1st showing. The story line is so fresh and full of positive direction. Can Not believe it will not be back..so very sad.

How r u going to cancell the best show out there … that’s crazy I’m so disappointed I haven’t missed a show yet I watched a few of the shows twice ..thanks alot

I have not missed an episode of Proven Innocent and need to know that Bellow will get what’s coming to him no matter how nice he was on the finale. The individual stories of the falsely accused are awesome! FOX please renew Proven Innocent for a second season!!

I waited eagerly each week for the next episode. I am hoping it is picked up for another year.
The acting is great. The storylines riveting. Not crazy about Madeline being gay. Otherwise, I can not find a reason to prevent me from watching another season of shows!
Bravo! Well done!

Why do you think they have to ruin all TV shows with one sided political junk. That’s not why we watch TV!! Just tell a story and don’t get political. I am done, just done watch Proven Innocent . Grow up producers and writers

At first, I wasn’t sure if I like proven innocent, but the more I watched it the more I liked it, to now I love the show!! Definitely do not cancel it!!

I was only taping it for my sister however I ended up watching it. It’s a great show.

Last nights episode was the final straw for us. Having lesbianism jammed down our throats to the extent of severe nausea was completely uncalled for.

Please do not cancel “Proven Innocent’. All the episodes played and watched are excellent. I am looking forward to the next episode anxiously.