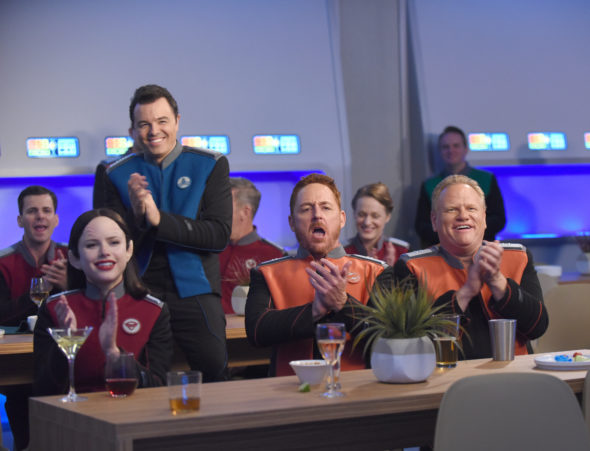 Good news, Seth MacFarlane fans. FOX has renewed The Orville TV show for a second season. Season one of the comedic space drama just premiered on September 10th of this year.

The Orville: A Look at the Ratings

The first season of The Orville is averaging a 1.45 rating in the 18-49 demographic and 4.85 million viewers. Out of the 15 scripted FOX TV shows we’re tracking (at the time of the renewal), The Orville ranks fourth in terms of its demo numbers and second, where total viewership is concerned.

Learn more about The Orville season two renewal from this FOX press release.

FOX RENEWS “THE ORVILLE” FOR A SECOND SEASON

FOX has renewed THE ORVILLE, the space adventure series created by and starring Seth MacFarlane, for a second season, it was announced today by Michael Thorn, President, Entertainment, Fox Broadcasting Company.

“Once again Seth has struck a powerful chord with viewers,” said Thorn. “He has delivered a series full of optimism, drama and his trademark humor. We want to thank him and the rest of the talented cast, as well as the producers and crew, for an incredible first season. We can’t wait to see where The Orville travels in the second.”

In tonight’s all-new episode of THE ORVILLE, “Into the Fold,” airing 9:00-10:00 PM ET/PT, on FOX, Ed (MacFarlane) and the crew set out to save Dr. Finn (Penny Johnson Jerald), her two sons (guest stars Kai Wener and BJ Tanner) and Isaac (Mark Jackson) after their shuttle gets thrown into uncharted space and they crash-land on a moon that is light years from The Orville.

With more than 14 million viewers across platforms, THE ORVILLE’s series premiere marks FOX’s most watched and highest-rated series launch since the 2015 debut of EMPIRE. THE ORVILLE ranks among the Top Three new dramas of the Fall season, averaging a 2.5/9 Live + 7 Day rating, a +67% lift from Live + Same Day, and more than 10 million multi-platform viewers, +108% vs. Live + Same Day.

THE ORVILLE is produced by 20th Century Fox Television. The series was created and written by Seth MacFarlane. MacFarlane, Brannon Braga (“Terra Nova”), David A. Goodman (FAMILY GUY), Jason Clark (“Cosmos: A Spacetime Odyssey,” “Ted”) and Liz Heldens (“Mercy,” “Deception”) serve as executive producers on the series. Jon Favreau (“The Jungle Book,” “Iron Man”) directed the series premiere episode. “Like” THE ORVILLE on Facebook at facebook.com/TheOrville/. Follow the series on Twitter@TheOrville and join the discussion using #TheOrville. See photos and videos on Instagram by following@TheOrville.

What do you think? How do you like The Orville TV series, so far? Do you think FOX should have cancelled or renewed it for season two? Sound off, in the comments.

glade its not canceled just like other show you television people that loves getting shows canceled because of this stupid rating system you have to go on.

I like the show its a great funny show.

Enjoy the show very much. Has a bit of humor & also a message like the original Star Trek. WHEN will 2018 season resume ??