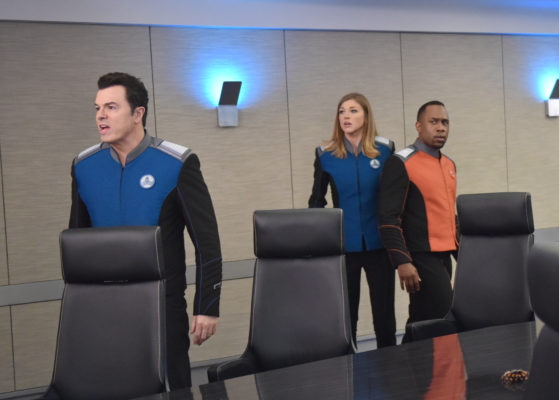 Don’t worry, The Orville isn’t cancelled. In fact although it has already been renewed for season two, FOX is reducing the space dramedy’s season one episode order from 13 to 12. It seems this has more to do with scheduling than anything else. TV Guide reports the lingering episode will be moved to the second season on FOX.

The reason for the change is likely due to scheduling. Since the series was never envisioned as a 22-episodes-per-season show, Fox probably wanted to squeeze the entire season into the calendar year rather than leave a few episodes for after the break or in mid-December after other shows have exhausted their new episodes for the year. It’s such a logical decision, we think Isaac would agree with it.

What do you think? Have you been watching the first season of The Orville TV series? How do you feel about losing an episode, this season? Let us know, below.

We, the fans needs as many episodes you can cram into one season. It’s wonderful entertainment and we certainly deserve it. I pay for television. It’s not cheap these days. Therefore, I would like my money’s worth! Drop the mike!!!!

I started watching The Orville after a friend told me about it. I am a huge SY-FI fan. All the STAR TREK, STAR WARS ,STAR TREK ENTERPRISE, VOYGER, plus any SY-FI Fantasy that comes along. The list is long. I liked the ORVILLE from the start even I did not know any of the actors. The show is great and the Aliens are very funny and serious at the same time. All in all it a really GREAT SHOW. CGI is out standing. Keep up the good work.

Obviously they had time on the schedule to run all 13 episodes — they re-ran episode 6 on Thanksgiving instead of giving us a new episode. I’m wondering if Seth pushed it just a little too far in one of the episodes we haven’t seen yet and some Fox executive got cold feet and pulled it.

Thank you so much for this wonderful opportunity, on the question. To whether or not to defer the episode till next season. There were 13 episodes scheduled for this series. It is become very popular and deserves its full season since most seasons are least 22 episodes. and the episode has already been filmed, edited why, shortchange us again.I don’t think it’s fair to the fans who have developed a following are going to be shortchanged till next year. So please tell Fox to put the episode back for this season. Out of fairness for new show. I thank you… Read more »

Thank you so much for this wonderful opportunity, on the question. To whether or not to defer the episode till next season. There were 13 episodes scheduled for this series. It is become very popular and deserves its full season since most seasons are least 22 episodes. and the episode has already been filmed, edited why, shortchange us again.I don’t think it’s fair to the fans who have developed a following are going to be shortchanged till next year. So please tell Fox to put the episode back for this season. Out of fairness for new show. I thank you… Read more »

Don’t leave any shows out

It saddens my day to know that this season will be one less episode of the show. I love that it takes after Star Trek I think that is amazing and brilliant I think the show is great and I wish that we weren’t losing an episode

This is a show that started life as a comedic, tongue in cheek Star Trek clone and whilst it still has that, it has really developed into something very good indeed, that also mimics the Star Trek legacy by addressing modern societies issues in a way that is not too serious but also gets some good points across. This deserves to go forward although I suspect that the initial criticism from some quarters may have put people off and if you are one of them, revisit the show and you will be pleasantly surprised by the combination of serious and… Read more »

Soooo LOVE this show!!!! And very glad it has been rebewed.

It makes no sense to shorten the season. The show is a hit! We have to wait until Fall 2018 for Season 2 and that will be a long wait! A Season 1 episode will have subtle differences to an episode shot after a season break; hairstyles, props, set decorations will be inconsistent. Sci-Fi fans will notice, and deserve better. The only way this WOULD make sense is if there is something in Episode 13 that would affect continuity of the now-renewed series (i.e. in the finale, the ship is decommissioned, or a major character was going to be killed-off).… Read more »

I think they are making a mistake with moving an episode that was orginal written as the ending to the first season to the secind seasons. Especially with a show that has been so surprisingly popular. I truthfully had very little interest in this comical science fi tion show but was istead only looking forward to the new star trek. However when the new star trek turned out to be star trek in name only and such a huge disapointment i looked elsware for my science fiction entertainment and found this wonderful show. A show that whike light snd fun… Read more »

The article only states that one episode from S1 will be moved to S2; it doesn’t say the S1 finale is the specific ep being moved. It’s more likely that a stand-alone episode (which many of S1’s eps have been) has been bumped, with the original S1 finale remaining intact (along with any other scheduled episodes involving the season-long arc). Totally echo your sentiments on the show, though, and would definitely prefer to have as many eps as possible this season. Orville’s been a blast. It’s clearly been created in the mold of genuine Star Trek (well, at least TNG,… Read more »

This is a fun sci fi show . I love all the actors. Keep it going.

I hope they give it a 22 episode chance.

i imagine macfarlane might not have time to write, direct and act in 22 episodes, on top of family guy and everything else he does, though none of the rest of his stuff is of any interest to me. i wish! a full season would be awesome – this show is wonderful.

“We renewed the show, now let’s mess with the scheduling.” Ah, you gotta love TV networks… There was no need to have done this. Having just let the final episode air this year on Dec. 14th, would’ve made no difference. Maybe if they didn’t take that break after episode 6, they wouldn’t have had to pull the last episode and still ended it on Dec.7th! I know, I know it’s only one episode but I mean if that 13th episode was serving as the season finale, did they not have elements in it that would make it out of place… Read more »

How stupid can FOX get. Instead of dropping a episode just have the last two(12 & 13) on the same day. Jesus xxxxx.