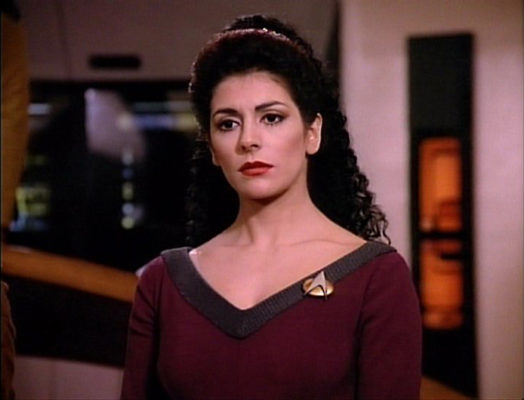 It’s a Star Trek: The Next Generation reunion! TrekMovie reports Marina Sirtis and Jonathan Frakes will reunite for season two of the FOX series The Orville.

At the recent Star Trek Las Vegas conference, Frakes announced Sirtis will guest star on season two of The Orville and he will direct. Other guest stars for the upcoming season include F. Murray Abraham, Ron Canada, Tony Todd, and Ted Danson.

Season two of The Orville premieres on FOX on December 30th.

Here’s what Sirtis had to say about Frakes as a director:

He is a force of nature and he gets it. There are two types of directors. Directors who like to do whizzy things with the camera and shots and all that. And then there the directors who are really good with actors. They usually fall into two separate groups. This one [pointing to Frakes] is both…The studio loves him, the actors loves him, the crew would walk on glass for him. It’s a happy set. The work gets done. There is no tension. There is no angst. You know you are going to get the work done. You are producing a good product. You got a great guy at the helm. It’s perfect, perfect.”

What do you think? Are you fan of Star Trek: The Next Generation? Do you watch The Orville?

Fan of Star Trek and definately fan of The Orville. Glad its coming back fir season 2. Jonathan Frakes is an excellent director. Have seen a lot of his work, and looking forward to seeing more.

I am definitely a Star Trek fan. And I really enjoy watching the Orville. Keep up the adventures for all the Star Trek fans.

Well, sounds like Troy is still in love with Riker 🙂 Still, she’s good, Frakes is good, and Orville’s great. So fun to relive Star Trek in any form, what’s to complain about?