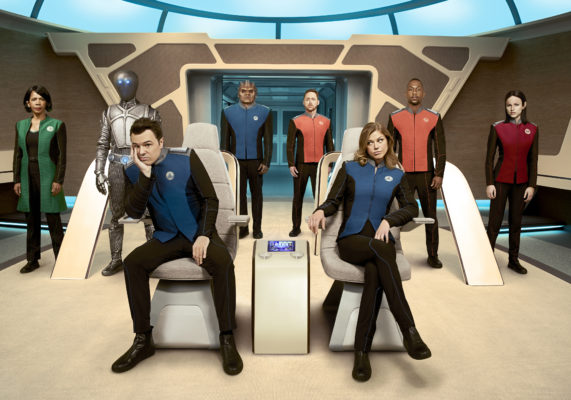 How does The Orville compare to Star Trek? Recently, Jonathan Frakes spoke with IndieWire about directing both the FOX and CBS TV shows.

In the interview, Frakes revealed that he approached directing The Orville as he did directing Star Trek: The Next Generation:

Stylistically, your responsibility as an episodic television director [is] when you do a show like ‘The Orville,’ you want that show to look like ‘Next Generation.’ And when you go to Canada to do ‘Star Trek: Discovery,’ they want that show to have the feeling, and look, and vibe of the J.J. [Abrams]-era ‘Star Trek.’ Much more cinematic, a lot of crane work, and a lot of movement, a lot of dutch angles. On ‘Next Generation,’ the traditional framing, and the things we became accustomed to as fans of the show, we see in [‘The Orville’] because that’s the look.”

I was afraid that it was going to be like ‘Family Guy,’ and it’s not really, but it’s also not really as serious as ‘Next Generation.’ I think Seth [MacFarlane], and Brannon [Braga], and whoever else is involved in all this, they found a tone that clicks with this audience, either the millennial audience or the old school audience. Everyone is very pleasantly surprised at how well the show has been received. I’m happy to see the homage, and I’m happy to see success for whoever wants to steal good ideas.”

What do you think? Have you seen The Orville? Does it remind you of Star Trek: The Next Generation?

I hated the first episode of the Orville, the humor was too juvenile, on par with Family Guy. I stopped watching. But after reading others’ comments over the weeks decided to give it another try. To my surprise, the show matured in tone and I now watch when I can.

The Orville is terrific. I love the look and feel as well as the character development of the show. I like Discovery too but I really look forward to the Orville

I thoroughly enjoy “The Orville” , and will continue watching. Love the characters, and the humour. I won’t be watching the newest Star Trek though, since the whole cast had their photo taken, as a group, ‘taking the knee’ in protest of their President. Grow up people.

Actually, I think “The Orville” is in a class by itself. Yes, there are some aspects that Re-Mind me of various “Star Trek” franchises, such as “The Next Generation,” but I look at it, and watch it like it is is own series, homages and all.

There is a barrier for me with Star Trek Discovery. It is only on CBS Access and I will not be forced to pay an extra fee to see it. People outside the USA don’t have to put up with that. I’ve commented about this in the past so I will not state anything more on that and will stick to the topic of show quality on Orville VS Discovery. I agree with Jonathan Flakes take on both shows. This similar opinion was stated in a YouTube video someone did a few months back. You can possibly see this if… Read more »

I agree on the whole CBS Access thing, and I live in the US. I refuse to pay to watch. Besides, the first episode of Discovery was made available for free and it didn’t interest me.

Now, the Orville. I thought it was going to be Family Guy in space. I don’t watch Family Guy. I’m glad I watched The Orville. The Orville is actually dealing with current issues and so far I like how they have done it without being “in your face” about it.

I hope The Orville goes on many adventures for us to watch.

I have to be honest but the first couple of episodes of the Orville or kind of sophomoric. But then the show matured and took a look and feel of its own and I love the way the characters interact. I am so happy that it was renewed for another season. I just wish the seasons weren’t so short