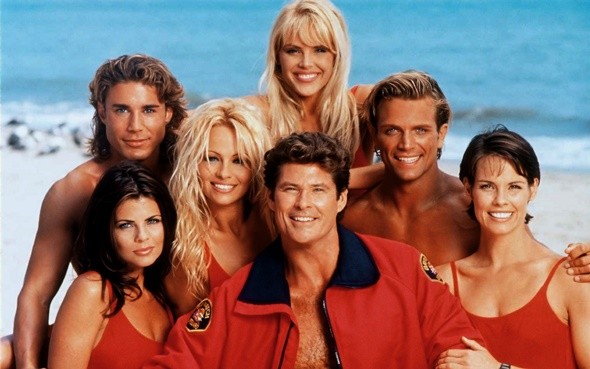 Is Baywatch returning to the small screen? Deadline reports FremantleMedia is developing a reboot of the ’90s TV show.

The action drama centered on a group of lifeguards who patrol the scenic beaches of Southern California. The cast included David Hasselhoff, Pamela Anderson, Alexandra Paul, Nicole Eggert, Jeremy Jackson, and Yasmine Bleeth. The show ran for one season on NBC, from 1989 to 1990, before switching to first-run syndication for another 10 seasons.

I think we thought the film might have given us reason to reboot the TV series, but given the mixed reviews that didn’t happen straight away. I think if this remastered version is sold extensively and a new audience comes to Baywatch, then it will give us a real indication as to whether a new series could be successful. We would definitely think seriously about making a new series and maybe we’ll get approached by some broadcasters about making one.”

What do you think? Are you a fan of the original Baywatch? Would you watch a reboot?

I’m in the process of watching the original Baywatch on Hulu. I would like to see a new series to start, I would definitely watch it. I just hope it’s not like the movie that they made. I felt like the movie was a little on the the goofy side. It didn’t have the same feel to it as the original tv series. I felt the movie kinda made fun of the characters from the original, just like the Dukes of Hazzard movie did for it’s tv series. But I am hoping for a Baywatch come back.

Baywatch was one of the best made series ever on TV. I would definately watch a reboot If the key characters were brought back to life including rolls played by Pamela A. And David H. The show would only be successful with the two most popular characters at least having thematic rolls or at least continuous cameo parts. If Dallas ( reboot) could do it, Baywatch Certainly can do it! David H. Would also have to be involved in creative content to keep the original flavor And the ‘on the edge of your seat – often life threatning entertainment’ that… Read more »

I have been watching it all over again on Amazon. I was thinking I would love to see baywatch again on tv. Love to see some of the original characters along with new you get characters too. Jeremy Jackson looks great, so does david charvet. I think if done correctly it would be great.

I personally would love to see a continuation of Baywatch! Baywatch was one of the top watched shows in the world, that should say of how successful it was on air. It really would be a wonderful opportunity to have new characters as well as returning characters, have male and female models and real life lifequards. A Baywatch reboot would be a much needed change to the dullness of television nowadays, have the positivity of Baywatch rather than the sameness of the gritty dramas that seem to be everywhere nowadays. Baywatch would bring back the excitement of television again!

No I never watch much off the show I was going to university busy with work bring back.the shows that you cancelled the brave designated survivor deception Chicago law others

If the reboot is set in Los Angeles County once again, they should work on a spin-off show set in Miami Beach. Just call it “Baywatch Miami”, OK?

I’m a little confused here… the POP channel has been showing the OG Baywatch series for well over a year now. I remember when I used to love that show, but when I saw it again.. I was like, was I dumb as a bag of rocks or was it the show? It had to be the show, it was so cheesy and way too predictable! All it was, was an “adult” version of Full House or other shows like that.. They all had the same messages about drugs, sex, dieting, pier pressure, assault, date rape, smoking, and blah blah… Read more »

I said this about The Facts of Life and I’m saying it again. With all these reboots and remakes and revivals and stuff, why watch TV anymore?

Too right! I don’t bother with TV as such any more. I buy box sets of good TV series that I never saw originally – “The Wire” ; “Oz” ; “I Love Lucy”, etc. They are really cheap now and provide hours of entertainment.
Why on earth would you remake “Baywatch”? The original was bad enough!