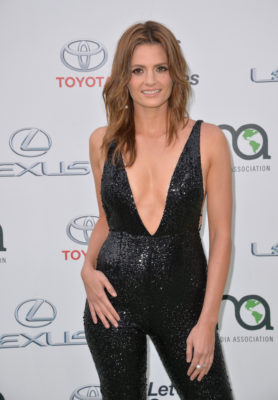 Absentia is slated to premiere on Prime Video in 2018.

SEATTLE – November 15, 2017 – (NASDAQ: AMZN) – Amazon today announced it has added critically acclaimed thriller Absentia to its lineup of original dramatic series – all episodes will debut exclusively on Prime Video in the U.S., as well as in select markets globally, including Australia, Austria, Germany, India, Israel, Italy, Netherlands, Singapore, South Korea, Turkey and the U.K. The series, premiering in 2018, will also be available in additional territories after its linear broadcast debut. Starring and executive produced by Castle’s Stana Katic, Absentia centers on FBI agent Emily Byrne (Katic). While hunting one of Boston’s most notorious serial killers, Agent Byrne disappears without a trace and is declared dead. Six years later, Emily is found in a cabin in the woods, barely alive, and with no memory of the years she was missing. Returning home to learn her husband has remarried and her son is being raised by another woman, she soon finds herself implicated in a new series of murders.

Absentia, produced by Masha Productions and distributed by Sony Pictures Television in association with Sony Pictures Television’s International Networks, garnered much fanfare when it opened this year’s Monte Carlo Television Festival and marks Katic’s first leading television role since Castle. The series was the number-one program in its timeslot when it debuted in Spain, Portugal, Romania and Poland on SPTN’s AXN channels (Source: Techedge: Kantar Media [Live+VOSDAL], and ARMA – Kantar Media, Nielsen Audience Measurement; all timeslot rank stats based on competitive set of channels for each market).

“Amazon is the perfect home for this innovative new thriller series. We believe Absentia will be a stand-out show for Amazon Prime members around the world,” said Paul Littmann, EVP, Worldwide Television Distribution, Sony Pictures Entertainment.

“Absentia started as a passion project for Sony’s Networks group with a brilliant director and producer and a stellar cast of international talent, all willing to jump into an entirely new model. We are thrilled to share this premium independent drama series with Amazon’s global viewers,” said Marie Jacobson, EVP, Programming & Production, Sony Pictures Television Networks.

Absentia also stars Patrick Heusinger (Jack Reacher: Never Go Back) as Emily’s husband and fellow FBI agent Nick who struggles with the guilt that he stopped looking for Emily, and his feelings for her that have resurfaced – especially now that he’s married to another woman. Nick is now tasked with the unthinkable: having to bring Emily into custody as the prime suspect in a string of shocking new murders. Forced to prove her innocence, Emily goes on the run. But the closer Emily gets to answers, the more she puts herself and her family in danger. Can she prove her innocence before it is too late and discover the truth about her abduction?

Absentia will be available for Prime members to stream and enjoy using the Amazon Prime Video app for TVs, connected devices including Amazon Fire TV, and mobile devices, or online with other Amazon Original Series online at Amazon.com/originals, at no additional cost to their membership. Eligible customers who are not already Prime members can sign up for a free trial at www.amazon.com/prime. For a list of all Amazon Video compatible devices, visit www.amazon.com/howtostream.”

What do you think? Are you a fan of Stana Katic? Will you check out Absentia?

Thank you amazon for stepping up to the plate and airing Absentia. After ABC Studios and Channing Dungey fired her from Castle it will be great to see her back again. For what I have seem of Absentia it is really good.

I agree best decision Amazon made with Absentia and perfect role for Stana Katic who is a gifted actress and someone that I admire for her strong and determination goals in life.